Two people who experienced an unforgettable night find themselves reconnecting, but weighed down by life changes that have changed both of them in an emotionally intense romance that kept me glued to the pages.  Keep reading to get a tempting taste of Drew by Marie James, along with my impressions of it, then add this 15th installment in the Cerberus MC series to your bookshelf too! 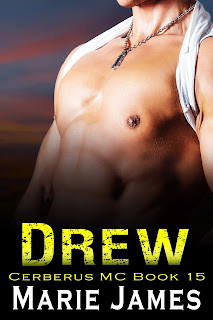 Falling for a girl I just met was never in my plans.
We had one night together and most days I convince myself that she was an apparition—something I made up in my mind to get me through the hard days.
Then I found her again.
Only she wasn’t happy and smiling, giving me a hard time like she did the day we met.
She was broken...unseeing eyes no longer filled with life.
She was gone because of another person’s disregard for human life.
That night devastated me—transformed me from a person who upheld the law to a man that broke it.
My life was ruined, and all I had to fall back on was the Cerberus MC. Returning to the clubhouse breathed new life and determination into me.
I went from having nothing left to having everything to live for. 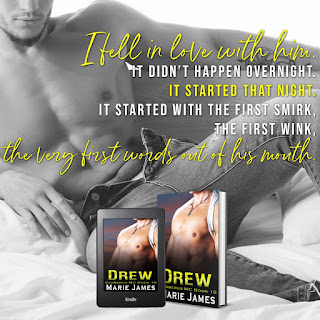 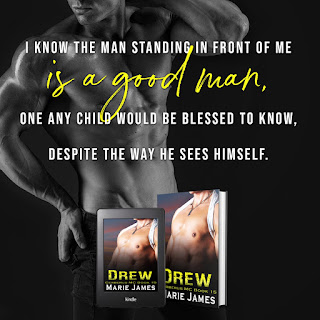 MY IMPRESSIONS OF THIS BOOK:
As a fan of MC-themed romances, I've read my fair share and I'm thrilled when I find one that leaves such a lasting impression...and this one definitely did!  From the very first page to the last this was an emotional rollercoaster ride that kept me on edge, kept me twisted in knots through each up and down, and introduced me to an unforgettable main couple that I'm still thinking about.
Drew was a police officer when he first met Izzy in an encounter that changed both of their lives irrevocably.  For Drew, she became a mystery that he couldn't forget, an obsession that left him on edge and making a dire decision when he thought she was dead.  Returning home after serving a prison sentence Drew's clearly a changed man, one weighed down by his past actions and feeling unworthy of grasping the happiness that Izzy represents.  It hurt my heart to see him sacrifice so much for so many others, but it drew me to him too.  He's a man of strong emotions, a protective man, but he's also a vulnerable one who often tries to be a martyr.  Despite all the emotional highs and lows his decisions engender it was satisfying to see him finally get his life back and get the family he so richly deserved.  For Izzy, their night together was equally unforgettable as it left her pregnant but not knowing where the man who left his mark on her heart went...until he was slated to go to jail.  Though they're time together was fleeting they built a foundation that had me rooting for them every step of the way.  Their time apart meant she was a single mother, it meant she had to stand strong all on her own, and it made her a capable and strong-willed heroine that I liked very much.  Together Izzy and Drew made each other better, they were a couple whose love was meant to be, and their angst-fueled journey to HEA kept me glued to every emotional twist and turn.
Though this is the 15th installment in the Cerberus MC series it can (and does) stand strongly on its own due to its powerful main couple and non-stop emotional highs and lows.  There's a sense of family permeating this story, one that kept me wholeheartedly invested in Drew and Izzy's journey, and can be made all the richer by reading the previous installments which will give early glimpses of this couple.  On a whole Ms. James has crafted a crackling romance, with a delicious hero, in an engaging tale that is a satisfying addition to the genre and is a story that I definitely recommend!
My rating for this is an A-
*I got this book from the author for review in exchange for my honest opinion. 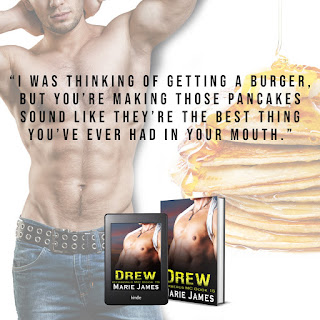