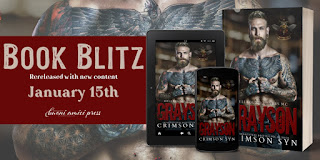 It's a battle of wills between a determined woman and the VP of an MC in this erotically-charged tale that kept me glued to the pages.  Keep reading to get a tempting taste of Grayson by Crimson Syn, along with getting my impressions of the first two installments in the Hellbound Lovers MC series, then add both of these sexy and suspenseful romances to your bookshelf! 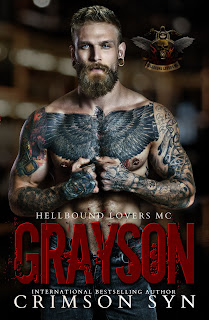 GRAYSON
She’s a tempting wildcat and she’s driving me insane!
Ever since the first night we met, I can’t seem to get away from Rahyne Andrews.
Her kisses are toxic and I can’t seem to say no to her.
My only problem is that she doesn’t seem to be interested in anything more than my body.
And I’m not about to have my control taken away from me. She either bends to my will, or I’m walking.
RAHYNE
Grayson Carter is everything I ever dreamed of and more.
He’s gorgeous, smart, and knows how to take care of a woman’s every need.
But I’ve suffered enough with men in my past, And the last thing I want is to have another failed relationship.
Especially, when it involves the VP of the Hellbound Lovers MC.
What he doesn’t know, is that I’m the one in control.
I’m always in control...
So why is it that Grayson Carter is the only man who has ever made me want to lose it? 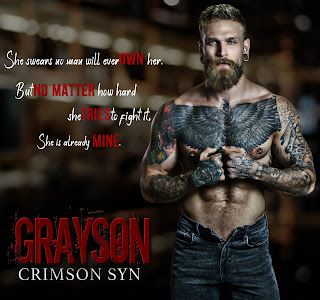 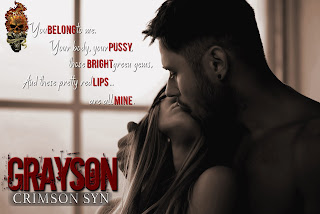 MY IMPRESSIONS OF THIS BOOK:
Into the crowded genre of MC romances comes this second installment in the Hellbound Lovers series and it's left me a bit more satisfied than the series starter I just read.  The main couple is a combustible pairing focused on their battle between the sheets while dealing with outside forces causing trouble for the Club.  Grayson's a drool-worthy Club VP who's happy with his friends with benefits relationship with Rahyne...until he isn't happy and decides he wants more from her.  Through each twist and turn the temperature turned ever hotter in this erotically-charged tale with moments of suspense that kept me turning the pages.  Things are getting even more dangerous for the MC courtesy of a rival Club and everything seems to be coming to a head.  By the turn of the final page I was left satisfied but feeling like this tale was a repeat of what I've read before.  So here's hoping for a less "been there, done that" storyline the next time around!
My rating for this is a B.
*I got this book from the author for review in exchange for my honest opinion.
DISCOVER MORE ABOUT THE HELLBOUND LOVERS MC SERIES here. 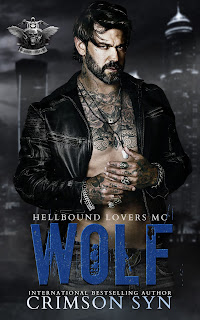 MY IMPRESSIONS OF THE FIRST INSTALLMENT IN THE HELLBOUND LOVERS MC SERIES:
As a fan of MC-themed romances I've definitely read my fair share of them!  I'm always on the lookout for new voices though and was drawn to this book as it's the first installment in a long running series that seems to still be going strong.
From the moment Wolf and Scarlett meet there's fireworks, a combustible connection that's weighed down by the different worlds they come from.  Wolf is the president of an MC, while Scarlett comes from the world of law and order...and according to the Club's rules these two worlds should never meet.  For Wolf, he spends a lot of time trying to justify his feelings for Scarlett as he can't see himself with anyone else.  Scarlett too is determined to have him and refuses to take no for an answer as the remainder of this fast-paced romance ends up as an endless push/pull on a rocky road to HEA.  Add in some suspense, lots of steamy encounters (almost too many at times), and you end up with a satisfying and entertaining read.  While much of this storyline is predictable I still enjoyed it and am looking forward to getting deeper insight into the other members of the Hellbound Lovers MC.
My rating for this is a B-
*I got this book from the author for review in exchange for my honest opinion.
AUTHOR INFO:
International Bestselling Author, Crimson Syn, has been writing since the age of sixteen. Born and raised in New York City, to two extremely supportive Colombian parents, Crimson picked up the pen to escape from bullying in school. Her first book, Wolf: Hellbound Lovers MC, was published in March 2017, and ever since she has been focused on bringing her readers page turning, lip biting, bookmarking passion.
Today she is the lead on the Royal Bastards MC project, and she is working hard on creating brand new worlds for you to escape into. Her alphas are rough and possessive, and her heroines are independent, bright women with lots of sexy curves who know how to handle these naughty boys. From the Motorcycle Club world, to a twisted Alice in Wonderland, and a very sexy Cowboy series-Crimson's sole goal is to indulge her readers into these steamy reads that will send you into the arms of dangerous alphas and deliciously sexy rogues without leaving the confines of your nice warm beds.
If she is able to entice your inner goddesses, then she has done her job.
WEBSITE  |  FACEBOOK  |  TWITTER  |  INSTAGRAM  |  NEWSLETTER
at January 15, 2021