Friends become lovers in this sensual and suspenseful tale that brings two people together during a blizzard as they try to keep safe from a murderer hunting them.  Keep reading to get a tempting taste of Lethal Protector by Kaylea Cross, then add this third installment in the Rifle Creek Series to your bookshelf! 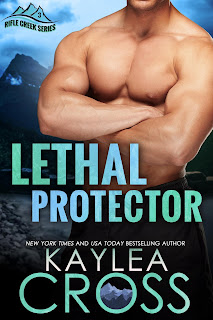 She unknowingly threatens his control.
Single mom Tala Baldwin is no stranger to sacrifice. After losing her leg while serving her country, she’s now training to become a competitive biathlete. With her daughter off to college, she’s able to shoot for her dream of making the national masters team. Even her Christmas break in Rifle Creek doesn’t slow her down. She’s asked her trusted friend Braxton to help her train—all while trying to pretend she doesn’t ache for him. Braxton was there for her during the darkest day of her life and he’s been there for her since…but only as a friend. In fact, he seems more determined than ever to hold her at arm’s length—until a deadly blizzard traps them in the mountains with a wanted killer hot on their trail. Now Tala once again finds her life in his hands as they face the lethal threats together.
Now he’s at his breaking point.
Sgt. Braxton Hillard is a master sniper, renowned for his ability to operate without emotion. Except with Tala. She’s all he’s ever wanted—but can’t have. For four long years he’s kept his distance. She’s way too good for him and she would realize that if he ever made a move. But the attraction between them is too powerful to deny, and once she makes it clear she wants him, he can’t keep his distance any longer. As they fight to survive in the mountains, all bets are off. Braxton is ready to sacrifice everything to protect the woman he loves—even his own life.
BUY LINKS:  AMAZON  |  BN  |  KOBO  |  iBOOKS 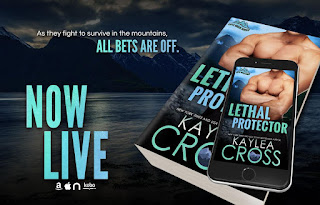