Book Cover Reveal for The Rebel by Kendall Ryan......

An unforgettable one night stand lingers in the thoughts of a woman recently made owner of a hockey team and a man who's head of security for the team in a battle of wills that heats up things on and off the ice.  Keep reading to get a tempting glimpse of The Rebel by Kendall Ryan, then start counting down the days until this first installment in the Looking to Score series hits bookshelves on March 30th.  To make the wait more bearable grab the prequel to this story for FREE for your reading pleasure! 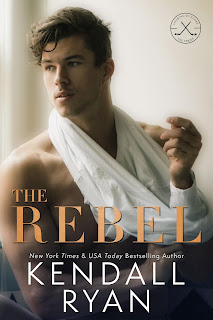 Eden’s entire life changed in an instant. After enduring a messy breakup and the death of her grandfather, she’s the new owner of his business, a struggling hockey franchise.
Bad things happen in threes, right?
Not one to back down from a challenge, she jumps in with both stilettos. There’s just one tempting and sinfully handsome problem...her new head of security, Holt Rossi.
Eden and Holt share a complicated history, one steamy night in college that she’s never forgotten. The man is about as mild-mannered as a pack of wolves, and now he’s back in her life, crowding her space, edging out all her good sense. And Holt hasn’t changed a bit. The emotionally damaged, sexy-as-hell beast of a man has her tied up in knots yet again.
But temptation proves to be too much for either of them to handle. Holt, for one, is willing to overlook the rules or even slam right through them, if it means he can have Eden again.
Between her ex—a bad-boy hockey player—and her distractingly handsome head of security, Eden is in for a bumpy ride.
Warning: This romance contains one growly, broken hero; a bunch of rowdy hockey players; and a smart, hardworking heroine whose life hasn’t been all sunshine.
FIND AT GOODREADS here.
PRE-ORDER LINKS:  AMAZON (US)  |  AMAZON (INT)  |  iBOOKS  |  BN  |  KOBO 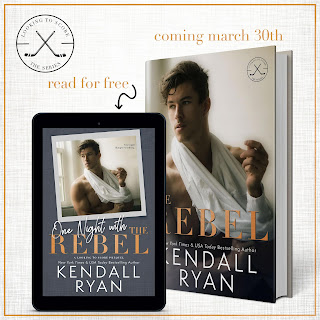 FIND OUT MORE ABOUT THE PREQUEL TO THE REBEL: 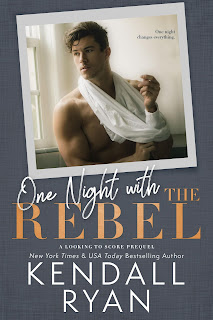 ONE NIGHT WITH THE REBEL
A brand new, FREE series starter from New York Times bestseller, Kendall Ryan.
She barged into my life and turned everything upside down.
We spent one scorching-hot night together, and then she disappeared into the sunset with the golden jock everyone adored. Which makes sense, right? A girl as beautiful and brilliant as Eden Wynn doesn’t end up with a rebel like me.
I expected them to live happily ever after, except that's not what happened.
She's back—and tempting me like no one else has. And while I'm certain I'll only tarnish her shine, I want her. Only her.
I'd heard the old notion that one night held the power to change everything. I just never believed it.
Until now.
FIND AT GOODREADS here.
BUY LINKS:  AMAZON (US)  |  AMAZON (INT)  |  iBOOKS  |  BN  |  KOBO  |  GOOGLE PLAY
AUTHOR INFO:
A New York Times, Wall Street Journal, and USA Today bestselling author of more than three dozen titles, Kendall Ryan has sold over 3 million books and her books have been translated into several languages in countries around the world.
Her books have also appeared on the New York Times and USA Today bestseller lists more than 100 times. Ryan has been featured in such publications as USA Today, Newsweek, and InTouch Magazine.
She lives in Texas with her husband and two sons.
WEBSITE  |  FACEBOOK  |  INSTAGRAM  |  NEWSLETTER  |  TWITTER  |  PINTEREST  |  GOODREADS AUTHOR PAGE  |  AMAZON AUTHOR PAGE |  BOOKBUB AUTHOR PAGE
at January 28, 2021