Book Blitz for Blood and Bone by Paula Dombrowiak (GIVEAWAY)......

The emotional highs and lows of a rock band are on display in this gritty and epic tale that spans years and pulls at reader's heartstrings from the first page to the last.  Keep reading to get a tempting taste of Blood and Bone by Paula Dombrowiak, then add it to your bookshelf.  In honor of this first installment in The Blood and Bone series make sure to fill out the form below for the chance to win a $25 Amazon GC too! 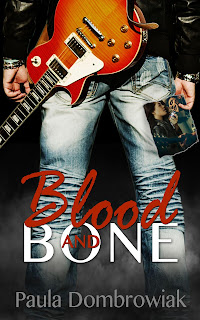 Love is complicated, messy, and sometimes painful but oh so worth it. A heartbreaking journey through love, friendship, family, and fame.
Music brought them together, addiction tore them apart, loyalty saved them. It was always Jack and Mia, everyone else was just collateral damage.
Jack O'Donnell's life was teetering on the edge. Forced, as a teenager, to make a decision that would change his life forever, he left his hometown to pursue a music career with collaborator Mia Stone. Living in a van by the beach was not the glamorous Los Angeles lifestyle they had envisioned but sparked the most creative time of their lives. Making it big was all they ever wanted but when it happened, friendships were tested, hearts were broken, and lives were changed forever.
Erin Langford is a seasoned journalist tasked with writing a feature on Jack O'Donnell. Being at the right place at the right moment puts Erin in a unique position to get the story, but at what cost? Having preconceived notions about Jack's rock star image, she learns there is more to a story than just the headlines. The two embark on a journey through Jack's past where he recounts the rise and fall of his band Mogo and the irreplaceable bond between himself and collaborator Mia Stone. The feature she thought she was going to write, turns into so much more.
Blood and Bone is an evocative story told in alternating time periods, from the early '90s to the present day about deep bonds between flawed people whose only outlet of self-expression is through their music.
EXCERPT:
“I didn’t get this gig because of my looks.” Erin explained but he seemed unfazed. “Just so you know.” Never had she cared about such a thing from any other interview, but she wanted Jack to respect her. That was the only way this interview would be taken seriously.
“If you say so.” He did not seem convinced.
“I have a pretty extensive portfolio.” She felt compelled to make him understand that she was not being used as bait or whatever he thought. “Edge is just one of the magazines that I’ve written for.” She clarified. “You can look up my work.”
“I believe you.” Jack said putting his hands up but it was Erin who was not convinced now.
Returning to business. “I’m going to turn on my recorder.” She told him.
“Ah, we’re getting serious now.” Jack leaned back in his seat, trying to appear comfortable but everything about him was tense.
“Where should we start?” Jack asked, smoothing his hair with one nervous swipe of his fingers.
Erin took out her notebook and clicked the pen open, always well prepared. The waitress dropped off their drinks. She discreetly placed a napkin near Jack with her name and number written on it. This angered Erin as she felt slightly protective over Jack after the events of the morning and gave the waitress the stink eye as she left the table.
Jack ignored the waitress and gave all his attention to Erin, waiting for her to continue. “You look displeased.” Jack suggested.
“I just think that’s presumptuous.” Erin motioned to the napkin.
“How so?” Jack cocked his head.
“Well, for one, we could be on a date.” Erin said in an annoyed tone. “Would you like for us to be on a date?” Jack’s smile unnerved her. “Don’t be ridiculous.” Erin scoffed.
“You brought it up.” Jack shrugged innocently.
“Ok, that’s not...” Erin was frustrated. “Never mind.” She settled back in.
Erin cleared her throat and went back to business. “It’s been 20 years since the first album came out. I’d like to go back to how the band was formed. There’s not a lot of information on this subject, other than you being high school friends, but I’d like to go a little deeper and talk about what it was like before the fame.” She said.
Erin could see a slight tick at the corner of Jack’s eye. “If that’s ok.” She added, swallowing hard.
Jack took a sip of his cappuccino and Erin could tell he was very pleased with it. “I was a sixteen-year-old asshole of a kid who was destined to drop out of school and end up in jail.” He said. “Music was all I had.”
“Well, you did drop out and you did end up in jail, on more than one occasion.” Erin sifted through her notes. “But my guess is that there was a lot that happened in between.” She took a sip of her latte. Every place made chai differently and she was not impressed but it was drinkable. She was partial to a shop around the corner from her apartment in Queens.
Jack chuckled. “That’s a matter of public record.”
“You said music was all you had. Why?”
Jack’s expression darkened.
“How did the band get formed?” Erin rephrased.
“It’s how every great love story begins.” A touch of nostalgia in his eyes. “I met a girl.” A smile spread across his face that didn’t quite reach his eyes. “I met a girl and she ruined me forever.”
Erin could not tell if he was talking about Mia or Amber. She only knew that she wanted to find out. 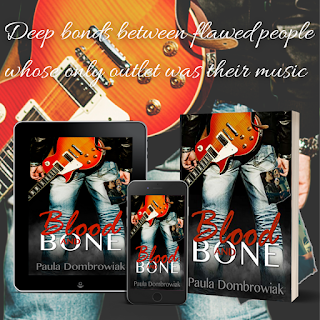 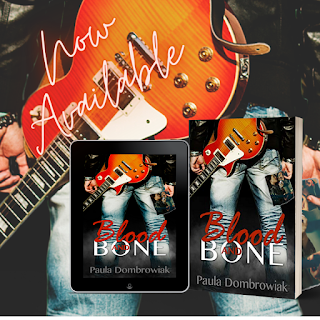 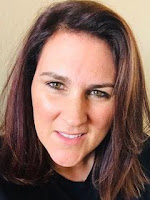 AUTHOR INFO:
Paula Dombrowiak grew up in the suburbs of Chicago, Illinois but currently lives in Arizona. She is the author of Blood and Bone, her first adult romance novel which combines her love of music and imperfect relationships. Paula is a lifelong music junkie, whose wardrobe consists of band T-shirts and leggings which are perpetually covered in pet hair. Music is what inspires her storytelling.
Paula is currently working on a sequel to Blood and Bone which focuses on Hayley O'Donnell's music career while living in her fathers shadow.
TWITTER  |  FACEBOOK  |  INSTAGRAM  |  SMASHWORDS AUTHOR PAGE  |  GOODREADS AUTHOR PAGE  |  BOOKBUB AUTHOR PAGE  |  WEBSITE
**********GIVEAWAY**********
a Rafflecopter giveaway
at January 18, 2021