A single dad and a woman who's celebrating her single status find their worlds colliding in an endearing and combustible war of their worlds.  Keep reading to get a tempting taste of Happy Singles Day by Ann Marie Walker, then start counting down the days until this book hits shelves on January 19th.  In honor of this standalone story make sure to fill out the form below for the chance to win 1 of 5 copies of this book too! 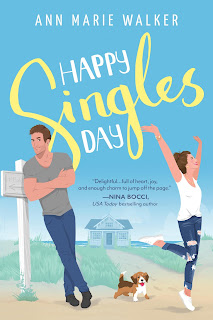 Single and proud of it! Oh, oops...
As a Certified Professional Organizer, everything in Paige Parker’s world is as it should be. Perfect apartment, perfect office, perfect life. And now, the perfect vacation planned to celebrate Singles Day. After all, what’s better than celebrating her pride in being single? Because who needs a man anyway?
They have zero taste in quality television, leave the toilet seat up, and sleep with your best friend. No thanks. Her life is fine just the way it is.
As the owner of a now-dormant bed & breakfast, Lucas Croft’s life is simple and quiet. It’s only him and his five-year-old daughter, which is just the way he likes it. Because who needs a woman anyway? They nag you to clean up your stuff, want the toilet seat put down, and expect the dishes to be done the same day the meal is cooked. No thanks. His life is fine just the way it is.
But when Paige books a room that Lucas’ well-intentioned sister listed without his knowledge, their two worlds collide. If they can survive the week together, they just might discover exactly what they’ve both been missing.
EXCERPT:
“What made you come here?” Lucas asked.
“You mean to a sleepy little island with no cars?” she asked, echoing his earlier line.
“In winter no less.” He leaned forward, placing one elbow on the counter and resting his chin in the palm
of his hand. “You know my story, Paige Parker. Now tell me yours. And you can start with why in the world a beautiful woman like you is spending a week alone at the beach.”
Her face flushed and a warmth spread through his chest. Complimenting her was an attempt to put her at ease, but her response pleased him far more than he’d expected.
She shifted in her chair, and the red in her cheeks became more noticeable. “I’m celebrating Singles Day.”
For a moment, Lucas drew a blank. But then he remembered the special request that had accompanied the booking. “Ah, that would explain the cake.” He’d thought a request for a cake inscribed with the words “Happy Singles Day” was a mistake, or maybe even a joke. Either way, he had ignored it.
Paige raised a brow. “Yeah, where is that, by the way?”
“Afraid you’ll have to add that to the grievances you’ll be filing with the booking site.”
She shook her head. “It’s becoming quite a list.”
“Ah yes, but on the other hand, there are unadvertised perks.”
“Like what?”
“Not every day you get to play with a litter of adorable puppies.”
Paige nodded. “So we’ll call it even on the cake.”
He was half-afraid to ask, but curiosity got the better of him. After all, whatever she was about to tell him had brought her to the point of booking a last-minute vacation. Surely he would find it amusing if nothing else. “What is Singles Day anyway?”
Her eyes lit up. “Actually, it’s called Singles Appreciation Day or, in some places, Singles Awareness Day.”
He cocked his head to one side. “Sad.”
She pursed her lips, then let him have it with both barrels. “It’s not sad. There’s nothing sad about loving yourself and being content with who you are. The latest census showed that nearly half the country is single.”
That wasn’t what he meant, but the exasperated look on her face was so adorable, Lucas couldn’t help but laugh. And once he started, he couldn’t stop. Paige glared at him, which only made him laugh harder, and when she crossed her arms indignantly over her chest, he nearly doubled over. He hadn’t laughed this hard in ages. It was like he was back in grade school with a serious case of giggles. “No, no, I mean the acronym.” He struggled to catch his breath and, when he finally did, explained. “Singles Appreciation Day,” he said, saying the words slowly so as to separate them. “S-A-D. Sad. Rather unfortunate acronym, don’t you think?” He’d no sooner finished when the laughter returned. Hell, his abs actually hurt.
Paige’s resolve cracked, and her frown melted into an amused grin. “Yeah, I noticed that as well. But for some reason when you said it—”
“You figured I was just being an asshole?”
“Let’s just say you’re lucky I don’t have that cake,” she said, shaking her head. “Or you would be wearing some of it right now.”
“Sorry,” he said, trying his best to act contrite and failing miserably. “Let me make it up to you.” She narrowed her eyes. “How?”
“By celebrating Singles Day with you.”
She snorted. “I think you’re missing the point of the holiday.”
“Not at all. We can celebrate being alone.” He winked. “Together.”
“You seriously want to celebrate Singles Day with me?”
He’d have thought she was being intentionally obtuse if it weren’t for the genuine look of surprise on her
face. “Yes. When is it?”
“Today actually. The day after Valentine’s Day. The day also known as Half-Price Chocolate Day, but that is beside the point.”
Lucas clapped his hands together. “Perfect.” He started for the front door.
“Where are you going?” she asked.
“To the store.” He shrugged into his coat. “A special occasion calls for a special meal.”
PRE-ORDER LINKS:  AMAZON  |  BN  |  iBOOKS  |  KOBO  |  BOOKSHOP  |  BaM  |  BOOKS2READ
AUTHOR INFO:
Ann Marie Walker is the author of six romances. She’s a fan of fancy cocktails, anything chocolate, and 80s rom-coms, and her super power is connecting any situation to an episode of Friends. Ann Marie attended the University of Notre Dame and currently lives in Chicago. You can find her at AnnMarieWalker.com.
**********GIVEAWAY**********
a Rafflecopter giveaway
at January 17, 2021