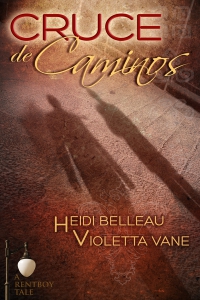 Addiction drives Sean O'Hara to a critical crossroads. Will he make the right decision, or will the floodwaters bound for New Orleans sweep him away?

Street kid Sean O’Hara never had it easy, but New Orleans has driven him to his knees. His girlfriend’s broken up with him for a sugar daddy, a gun-toting pimp has robbed him of everything but the clothes on his back, and he’s down to his last two OxyContin. Sean’s no seasoned streetwalker, but he’s not above it either, not when he’s already itching for his next fix.

A familiar-seeming stranger named Ángel may be his ticket to some quick cash, but only if Sean’s willing to help him indulge a high-class john’s weird fetish for the night. As Ángel tells him, in this city and this business, you have to get a little weird to survive.

When night falls on the French Quarter, Sean realizes Ángel and the john want more from him than he was expecting to give. What once seemed merely strange soon crosses the line into supernatural and sinister. And Ángel, the man Sean had viewed as a partner and protector, might also be his otherworldly judge and executioner.

This is an intriguing and thought provoking story that has a dream-like quality to it.  You're never quite sure what's real and what's imagined but you can't stop reading and I found myself completely enthralled in no time at all.  The characters of Sean and Christina are two drug addicts with lives spiraling out of control when fate intervenes in the form of Angel to set things on the right path again.  But who or what Angel is is the bigger question along with if they'll heed his advice.

Seeing the life of a drug addict is a sad thing and the depths to which Sean goes to to get what he thinks he wants were truly awful but realistic in our society.  I felt sympathetic towards him and those flashes of wanting to give up his addictions that I saw.  But to truly be rid of his addictions he'd have to cut ties with Christina and he doesn't want to be alone and likes the idea of being needed by her.  His life as a prostitute isn't overly graphic.  More time is spent talking about that part of his life as opposed to fully seeing it.

The character of Angel is difficult to categorize and give this book a paranormal feel.  Angel appears to be a religious deity bent of pointing Sean to a better way of living.  I'm intrigued by him and would've loved to have seen more of him and have a better understanding of what he truly is.  As things stand, he's extremely sexy and exceedingly mysterious.

This is an emotionally intense read with no real HEA.  There's a bit of hopefulness at the end but not in the way you'd expect when you first pick this book up.  Of all the installments in Riptide Publishing's Rentboy Collection it's by far the most radically different with its religious/paranormal overtones.  I enjoyed the dreamy and lyrical feel to the storyline and characters and am excited that we'll see more of their story in the future.  I'll definitely be counting down the days until that day arrives.

*I received this book from the author in exchange for my honest opinion.
at May 21, 2012