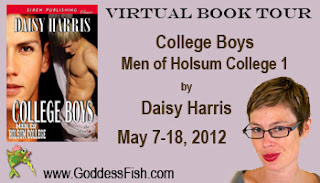 Daisy Harris' latest release made me feel like I was in college again, although my living situation wasn't as intriguing as the two leads in College Boys experience.  Courtesy of Goddess Fish Promotions I get to bring you a taste of Daisy's newest m/m book, along with a giveaway.  So here's your introduction to College Boys...... 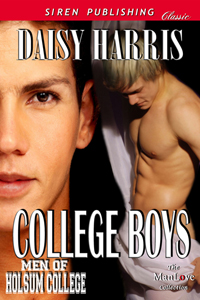 Peter listened to the sound of Chris stomping around next door but couldn’t figure out if Chris was trying to be loud for some reason or if he was drunk. “Hey, Chris.” Peter had been going out of his way to be extra friendly ever since their unfortunate date. Of course it hadn’t really been a date—Peter had been completely delusional thinking that it was. But regardless, their first attempt to interact outside of their connected room had been a disaster, and Peter had been trying ever since to feel back on his footing.“Heya Pete!” The volume and cadence of Chris’s voice told Peter that he indeed was drunk. “Have a good night?”Peter looked down at his chemistry textbook, open on his bed. He cursed the professor who had set the midterm for Friday. Most classes’ midterms had been earlier in the week, and the entire campus seemed to have started their post-test celebrations early. “Just cramming for the test tomorrow.”“Aw, man. Forgot about that. Sucks you still have one left.”“Yeah.” Peter closed the book and set it aside. His vision had gone blurry from hours of staring at diagrams.“You should blow off some steam,” Chris said through the wall. His voice was different—quieter and more tentative.Peter wasn’t sure what he meant, so he just answered, “Yeah, I’ve got a couple parties lined up for tomorrow night.” From next door, Peter heard some moving around and then the sound of Chris’s door opening. Still, Chris’s knock startled him and Peter looked up. “Yeah? Come on in.”He knew it was Chris, but that didn’t stop Peter from feeling lightheaded when he saw the other boy in his doorway. A red blush striped Chris’s cheeks, but Peter couldn’t tell if it was from the cold outside or if he was embarrassed. His blond hair seemed to sparkle under the hallway lights.“Can I come in?”Peter blinked. “Uh, sure.” He piled his books and papers onto the floor and shuffled to the far end of the bed. The only other place to sit was a chair, and Peter’s pulse raced as he wondered whether Chris would chose the seat or flop down on his mattress. He almost swallowed his tongue when Chris did the latter, bouncing like a happy Labrador onto Peter’s bed. Peter could smell the beer and sweat on him and under that the rich masculine scent Chris always left behind in the showers. “So, you wanna watch porn tonight?” Chris gestured over to Peter’s laptop sitting on his shelf. He stretched out, leaning back on Peter’s throw pillows as if he hadn’t just suggested something insane.“Um…” Peter wasn’t sure how to respond. He didn’t want to embarrass himself in case he was somehow misinterpreting Chris’s suggestion. “Really?”“Man, you should see your face.” Chris slapped his arm in that mock-fighting way he had in the car. He looked at Peter with his big, blue eyes—all innocence and temptation. “C’mon, it’s no big deal.”Peter tried to cover his panic with a snicker. “It’s not every day someone asks me on a porn date.” He hoped Chris was too wasted to hear his voice tremble. Ever since Chris’ birthday a couple weeks back, his soccer buddies had been pushing him to drink past his limit. Normally, it pissed Peter off, but that night he was grateful Chris probably wouldn’t remember. “I should have bought you a corsage.”“Dumbass.” Chris socked him in the arm again, though this time it was less of a slap and more of a stroke. He smiled in that good-natured, country-boy way of his. “I used to watch it with my old roommates all the time.”Peter smirked. “How very heterosexual of you.”Chris ignored his snide remark and used his bare foot to point at the laptop, as if he was too lazy to get out of Peter’s bed. “Load it up, man. I want to be shocked and awed.”“Fine.” Peter stood just far enough to reach for his computer. He tried to distance himself emotionally from what was going on, even though his cock was already hard and his skin felt so tingly he worried he’d climb onto Chris’s lap.“So, do you have a favorite site or something?” Chris curled up to cross-legged, his eyes intent on the screen. He bit his nail, looking sexy as hell—excited and curious. God. Peter thought he was going to burst into flames. He wished he were drunk, too. Then he’d have an excuse to lean in and kiss Chris’s damp, pink lips. Peter could touch him, maybe fondle him or offer a blow job. And if Chris turned him down, he could blame it on the alcohol the next day. But unfortunately, Peter was stone-cold sober and too much of a chicken anyway. “Yeah, there are a few I like.” He tried to sound nonchalant, though his hand shook as he struggled to use the touch screen. “Some can be pretty gross.”He opened a site that he thought wouldn’t freak Chris out too badly. The guys were clean-cut and young. The lighting was good. Everyone used condoms. “So, um…What do you wanna watch?”Peter couldn’t look at Chris as he waited for the answer. He kept his eyes glued to the screen as if the thumbnail pictures were the most fascinating things he’d ever seen. But he listened with every fiber of his being for what Chris would reply.“Uh…what do you mean?”Confused, Peter turned his head to find Chris only inches from his face. Chris was looking at the computer, his body lined up with Peter’s but not touching. And unlike Peter, who had only pretended to be riveted to the screen, Chris was staring at the images with wide eyes, like he was terrified and fascinated all at once. 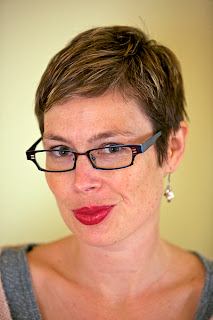 Birkenstock-wearing glamour girl and mother of two by immaculate conception, Daisy Harris still isn’t sure if she writes erotica. Her paranormal romances start out innocently enough. However, her characters behave like complete sluts. Much to Miss Harris’s dismay, the sex tends to get completely out of hand.

Prize is a $20 Amazon GC to one randomly drawn commenter during the tour.

-Giveaway is OPEN TO EVERYONE!
-To be entered, MUST leave a comment, along with your email addy.
-One commenter will be chosen randomly from all comments made throughout the tour, so the more tour stops you make a comment on the greater your chances of winning.  A list of all participating blogs can be found here.
-Giveaway ends at 11:59 PM CST on 5/18.
at May 14, 2012