Review for Ruthless by Cheryl Douglas 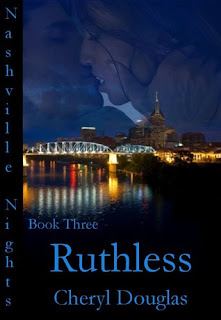 Marisa Turner has wanted her brother's best friend, Luc, forever, but she also wants a baby and it seems Luc isn't up to the challenge. She has to choose between the man she loves and the family she hopes to have. Fortunately, there's another man waiting in the wings to make her baby fantasy a reality.

Luc Spencer is tired of hearing about marriage and babies. He loves Marisa, but he can't promise her forever. After two years together, she tells him it's over. He's not worried, he believes she'll be back. But what will happen when he finds out there's another man waiting to take his place?

The love lives of this close-knit group of friends and family continues to be tumultuous in this third installment of Cheryl Douglas' Nashville Nights series.  This time around former lovers Marisa and Luc can't keep saying no to each other but unfortunately saying yes is equally as hard.  For these two star-crossed lovers the road to happiness is full of danger and explosive secrets.

Marisa has a career she loves and at one point she had the man she's loved since she was a teenager, but her desire to have a family doesn't coincide with what Luc wants so she's been trying to move on.  Rather unsuccessfully, considering that she doesn't love the man she just became engaged to.  Which is a good thing, since just like in the previous book a seemingly decent guy becomes obsessed and crazed by love.  To see this plot device used again was extremely irritating and disappointing considering how well the author portrayed the couple in the first book in this series.  It gave me a bad impression of Marisa by agreeing to marry someone she didn't love and expecting there to be a happy ending.  She was supposed to be smarter than that.

Luc too was full of stupid.  He's sexy but very dumb when it comes to relationships and his own self-worth.  The issues holding him back from marrying didn't really ring true for me, but as the secrets came out I was intrigued and knowing that the outcome will play a part in a future book adds to its importance.  He and Marisa certainly didn't lack in their sexual compatibility with many sexual interludes being extremely combustible.  Even when they're not together the sexual tension is apparent which is why it was so frustrating that mere stupidity was keeping them apart.

It was great to see all the characters from the two previous books and it made for a stronger story seeing how close everyone is, and their inclusions were inserted seamlessly throughout the story.  While not as satisfying as the first book in this series it's a slight improvement over the previous book and still an enjoyable read with bright promise for future books.

*I received this book from the author in exchange for my honest opinion.
at May 05, 2012