Review for A Hero Rising by Aubrie Dionne 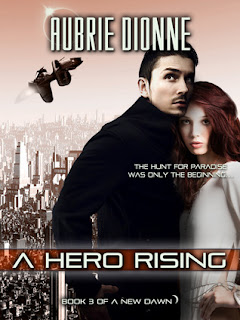 After watching his love leave on a colony ship, James Wilfred must save those left behind from a planetary apocalypse. Their salvation lies in an unfinished ship tucked away in a secret government base, and only James can break in and pilot him and his people to freedom on a nearby space station.

Skye O’Connor’s boyfriend never returns after his gang attempts an assassination of the Governor, and the State Building is destroyed. Worse, crazed moonshiners addicted to the chemical Morpheus have stormed the city, and she must find a safe place for her and her boyfriend’s daughter. When a heroic man saves her, Skye asks to accompany him on his quest to find the last colony ship left on Earth.

As the city falls around them, James and Skye must work together to build a new future, all the while rediscovering their ability to love, before the apocalypse claims them both.

Aubrie Dionne has done it again, she's created a heart pounding high-octane rollercoaster ride of a story with a nice bit of romance thrown into the mix.  As the third book in her A New Dawn series the action seamlessly picks up where the previous book started.  His love Mestasis has left the planet piloting a ship full of genetically special chosen ones while he's left behind in a world full of drugged-up zombie-like people (moonshiners) trying to save those left behind with time ticking away until nuclear bombs are set off.  When a plan is put in motion by the radical group he's a part of, James sets out to steal a ship left behind to get those few individuals left uninfected off the planet.  Along the way he rescues Skye and her young charge and together they form a motley crew that is the only chance left for survival for the lower class citizens.

This story was full of heart pounding action and kept the hands holding my eReader in a white knuckle grip.  James truly lived up to the qualities of being heroic.  He sacrificed everything for his people, including the first real love he had.  He's immediately drawn to Skye and feels bad that his emotions could change so quickly but with the end of the world looming I don't blame him for grasping happiness where he can.  The sexual tension between him and Skye was palpable and gave a much-needed sense of hopefulness.  Not only was James great with Skye, but with young girl Carly too.  He was more of a father figure to her than her own father and definitely more deserving of the title.  Sometimes children written into stories can be very annoying, but that's not the case here.  Carly was realistic with some moments of being upset but she was a mini-hero in her own right trudging along doing what needed to be done, never a burden.  Skye was a good match for James.  She started off weak but quickly gained strength in herself as she became the lone caretaker to Carly.  She kicks ass right alongside James and there were moments of unbridled strength as she fought the moonshiners that reminded me of Ripley from the Aliens movie.  At first James described her as a fairytale princess with her gentle looks, but as their journey went on she became a valkyrie in his eyes.  The sweet and subtle romance was wonderful to see and the few moments their love was able to show itself were particularly bittersweet considering all the death and destruction surrounding them.

I enjoyed this book from start to finish and even though it's part of a series it can be read on its own.  But why would you not want to read such an exciting, action-packed story full of memorable characters and thought provoking scenarios?  So strap yourself in and take a chance on this glimpse of the future and read A Hero Rising, as well as the rest of the New Dawn series!

*I received this book from the author in exchange for my honest opinion.
at May 08, 2012