Review for The Girls' Guide to Dating Zombies by Lynn Messina 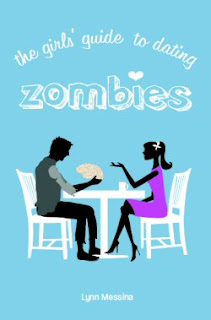 Hattie Cross knows what you're thinking: Zombie sex? Ewwwww. But she also knows that since a virus turned 99.9999 percent of human males into zombies, it's statistically impossible to meet--let alone date--the remaining 0.00001 percent. So she writes "The Girls' Guide to Dating Zombies" to help her fellow single women navigate the zombie-relationship waters.

Her practical how-to impresses the CEO of the largest drug company in the world, and before she knows it, Hattie, a reporter for a downmarket tabloid that specializes in conspiracy theories, is sitting down with the woman who single-handedly invented the zombie-behavioral-modification market. Granted access to the inner sanctum of zombaceuticals, she meets an actual, living, breathing M-A-N.

Now Hattie, the consummate professional, is acting like a single girl at the end of the twentieth century: self-conscious, klutzy and unable to form a coherent sentence without babbling. Worst of all, the human male appears to have impaired her ability to think clearly. Because all of a sudden she's convinced a conspiracy is afoot at the drug company and it seems to go all the way to the top!

Imagine a world where men have been virtually wiped out of existence leaving females in control of everything and those few remaining men becoming a valuable commodity.  It leaves a girl's social life in the dumps and leaves her with only zombies to keep her company in this humorous and clever story.

Most of the zombies we've seen thus far have been deadly and blood curdling scary, but in this story they've been tamed and soon become a girl's best friend thanks to Hattie Cross' new dating guide.  Hattie's an entertaining character writing for a gossip mag but longing to write more professional pieces but is happy with her consistent paycheck.  With her book's success comes entry into the largest drug company in the world where there's plenty of secrets to uncover.  Hattie reminded me a bit of Nancy Drew with her sleuthing skills and her upbeat attitude.  She's smart and assured in everything she does until she comes in contact with a real man, then it's non-stop klutziness.  Jake makes her tongue-tied and it's fun seeing that other side to Hattie.  I wish we'd seen more and learned more about Jake.  As one of the few men in the world I'd like to have seen more of his thoughts about what happened.  I also wish there had been more romance between these two.  So much sexual tension, but not enough payout for me.

This was an intriguing book meant to be savored and enjoyed.  Don't take it too seriously, just enjoy it for what it is.....humorous, clever, and uniquely entertaining.

*I received this book from the author in exchange for my honest opinion.
at May 02, 2012