For the last three weeks we've had the talented writers from Riptide Publishing's Rentboy Collection visiting us.  Today, I'm happy and excited to welcome Fiona Glass whose contribution to the collection is entitled Necessity's Door.  So let's celebrate this holiday in style with Fiona learning about her new release with a character interview with undercover cop Jake......

Since my latest book Necessity’s Door is released this very day at Riptide Publishing I thought it would be fun to report on an interview with Jake, the main character, which happened a few weeks after the events in the book.  The interviewer is a hot-shot journalist from a local newspaper in Birmingham and fancies herself for the next Pulitzer Prize, but Jake being Jake, she found things didn’t go entirely her own way!

Yeah, go ahead.  I tend not to advertise my last name anyway.  Not good if you're undercover, especially now it's so easy to trace people on the internet.  One whiff of that 'The name's Bond, James Bond' stuff and I'd have every criminal from here to Timbuktu beating a path to my front door.

Er, yes, I can imagine.  So tell me, Jake, what's it like being an undercover detective?  Is it as glamorous and exciting as the books and films make it sound?

I see.  Could you be a little more forthcoming?

Well, put it this way.  Most of the time I'm living an ordinary, normal, boring life, with all the everyday normal boring actions that we all do and take for granted - chores, shopping, nine-to-five job, paying the bills.  It's just that I'm living someone else's normal, boring life for a few weeks or months instead of my own.  And there's nearly always a lot of standing around.  You get used to having sore feet.

But it must be dangerous sometimes?

It can be risky, yeah, but usually only if something goes wrong or I cock up.  The biggest risk is always me blowing my own cover - even after several weeks it's so easy to forget who I’m pretending to be.  A couple of years back I nearly blew an operation when I told someone who my dentist was - even a detail like that can tip the bad guys off.  And then the other week...  No.

Go on, that sounds interesting.

No, sorry, I can't discuss individual details on recent cases.  Let's just say if it hadn't been for Mac - he's my partner, sort of - they might have been fishing me out of the nearest canal.  You certainly find out very quickly who your friends are.

That does sound exciting.  I know you're openly gay, Jake, so does that mean Mac is your boyfriend?

I've heard that your most recent case was a success, and that you were very brave.  Tell me more.

Nothing much to tell, really.  Like I said, I can't discuss details of individual cases. There was a lot of standing around, my feet hurt most of the time, and I had a few hairy moments, but our hard work paid off and we're hoping there'll be one less bastard on the streets of Birmingham as a result.

Is that all you can tell me?

Pretty much.  The case should be coming to court in the next month or so - the gory details will be in all the papers then.

But you worked undercover as a male prostitute, didn't you, Jake?

Can you tell me anything more about that?

I could, but I don't think your readers would want to know.  Except for the sore feet.  There’s a limit to how long you can stand on one leg propped up against a lamp post, you know.

You didn't enjoy it then?

Oh come on, what sort of a question is that?  Would you enjoy pretending to be a prostitute?

Probably not, no, but then we're not talking about me, are we, Jake?  Will you work as a rent-boy again?

Right, that's it, this interview is over.  I can't possibly answer that. 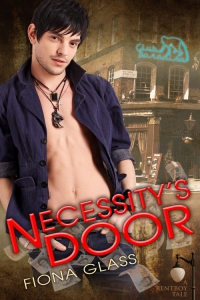 Being an openly-gay detective in Birmingham comes with its share of problems. For one, the pay is awful. For another, Jake always gets stuck with the crappy undercover jobs. Like posing as a prostitute to catch the new crime boss in town—a man notorious for rough sex with pretty young rentboys.

Jake’s latest op is fraught with difficulties, all of them men. Like his partner, Mac, who he’s secretly fancied for months. And his new client, Graham, who he keeps sleeping with for reasons far beyond maintaining his cover. And of course there’s the target, Frank Warren, who’s much harder to lure than Jake had anticipated.

The longer the job drags on, the tougher it gets for Jake to juggle his own needs with those of the job. They may be closing in on Warren, but Jake’s heart—and moral compass—are slipping through his fingers. Mac is there to back him up, but is he really the man Jake needs? Tough to tell among all those lies Jake's been telling himself and everyone else.

You can read an excerpt and purchase the book HERE. 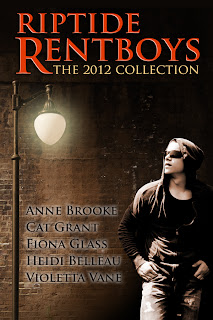 The paperback version of the entire collection will be released August 6th at Riptide Publishing!

Like the sound of it?  Want to read more?  Email me the answers to the questions posted below and I’ll put all the correct entries into a hat (well, actually a willow-pattern bowl, but who’s checking...) and the first correct entry drawn from the bowl at the end of the blog tour will win a mystery prize.

Here’s the questions:
1.  What is the real name of The Blue Baboon gay club?
2.  What colour is Frank Warren’s hair?
3.  How much does Warren pay Jake for sex?

Think you know the answers?  Then get emailing and good luck!  I’m looking forward to hearing from you.  And in the meantime if you’d like to find out more about me and my work, then please just drop by....

**To learn even more about this book, visit the other blogs hosting this tour listed here.
at May 28, 2012