The tour continues this week in support of Riptide Publishing's new m/m collection of books titled the Rentboy Collection.  Today we learn about the cover to Cat's contribution to the collection entitled Priceless.  Not only do we get to spend the day learning about this new book but everyone who comments has the chance to win a backlist title from Cat's written works.  So let's get started........................

Behind the Cover: Priceless

Priceless is a contemporary romance, and part of Riptide’s Rentboys series. The first challenge with this cover was creating something individual to the story, but also that would tie in overall with the other stories that make up the series.  Despite the rent boy theme, this story is more about relationships than sex, so Cat wanted to see something romantic, dramatic, even a bit angsty. So that’s what I ran with.

When I design covers, I like to give the authors a few options to choose from. With each cover concept I try to capture the mood they’re after to varying degrees. With Priceless I did one version that had a soft romantic feel, with pastel colors and Berkeley’s Sather Tower at sunrise.  It was a little too soft though, and one of the original models was too young.

The second concept was darker and featured a night shot of the Golden Gate bridge, along with an angsty model who represented Wes, the story’s rent boy. It was just a little too dark though, and didn’t quite capture the mood of the story.

The third and winning concept pulled all the elements together. I found a single model that fit Wes’s description, and the image—head down and slightly turned away, eyes downcast—had just the right touch of angst. Next I worked in a nighttime image of San Francisco and the university grounds. I did a few layers of the background to get a gradient that would give it some depth. Then layered in a bit of a grunge effect. I did a few blends of this to get the right tones I was looking for—romance was on my mind while working on the part.

After settling on the overall image it was time for the title and byline, and the Rentboy series icon. I didn’t want the icon to detract from the cover, so I went with a monochrome hue sampled from the background for the lamppost. I was happy with how it was coming along, but it needed a little something more. Still in the romantic frame of mind, I dug through my files for the little floral treatment and dropped it behind the text. That too needed to be subtle enough to add to the feel but not pull away from the title. I sampled the blue from the title, screened it back and then feathered the ends out.

In the first draft of that cover I had placed a large harvest moon hanging on the edge of the horizon and screened it back a little. We ended up pulling that as it gave the cover a paranormal slant. This isn’t a shifter story. ;-)  So we ditched the moon, pumped up the warm tones, added a touch of cool with the title, and called it finished.

I love doing cover design and find myself hard-pressed to pick a favorite. They all are. But I am very happy with this cover. Even more so that Cat was so happy with it too.

To see more of L.C.’s work, visit her virtual art gallery at http://lcchase.deviantart.com 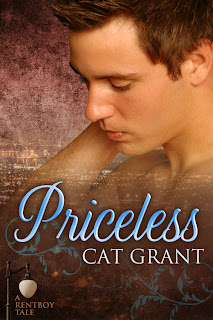 When love’s for sale, who really pays?

Connor Morrison is a 3-D optics pioneer, the star of the UC Berkeley physics department, and a socially inept workaholic. And with his dear friend and business partner, Steve Campbell, handling their investors, he’s content to remain in the shadows. That is, until he meets the gorgeous and starry-eyed physics student Wes Martin.

Wes is brilliant but broke. Ever since his scholarship fell victim to the financial crisis, he's had no choice but to sell his body to stay in school. Already half in love with Connor, Wes initially resists Steve's offer to be Connor's thirty-fifth birthday present. But in the end, Wes is too broke—and too smitten—to say no.

Connor has no idea Steve bought Wes’s attentions, and he quickly falls under the young man’s spell. Yet after one night together, Wes disappears. He can't bear to hook with a man he could so easily grow to love, but he also can’t bear to tell him the truth. Besides, if he sleeps with Connor again, there'd be no way to hide the bruises one of his regular johns loves to inflict. Only one thing to do: let Connor go. Walking away is painful, but not nearly as much as building a relationship on lies.

To learn more about this book, visit the other blogs hosting this tour that are listed here.

Prize is winner's choice of one of the titles from Cat Grant's backlist.

-Giveaway is OPEN TO EVERYONE!
-To be entered, just leave a comment, along with your email addy.
-Winner will be chosen using random.org and will have 48 hours to respond to my winner's confirmation email or a new winner will be chosen.
-Giveaway ends at 11:59 PM CST on 5/18.
at May 17, 2012