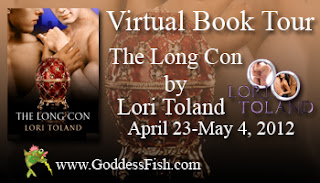 There's a super steamy story with a bit of mystery thrown in that's a new addition to the m/m genre.  Courtesy of Goddess Fish Promotions I'm bringing you a glimpse of The Long Con as well as the chance to win an Amazon gc.  So let's welcome Lori Toland where she'll be talking about making the "bad guys" appealing......


How to make the "bad guys" appealing?

Well, this is a great question. I went to the RWA convention in 2010 when it was here in Orlando and the amazing Angela Knight talked a little about the villain at how to write action scenes. I’m paraphrasing here but what I took away from it was that you had to understand where the character was coming from. The best villains believe that they are on the side of the right, and they are the ones who deserve to win the fight and sometimes they succeed.

So armed with this knowledge, I sat down to write Tony. Bradley had come in to seduce and distract Tony, even though he was instantly attracted to one of the con men. Well, *BANG* Tony and Bradley had chemistry that sizzled and as Bradley seduced Tony, I found out just how compatible they were.

By their fourth sexual encounter, while Bradley had clocked in a big fat zero with his love interest, I knew I had a problem. The villain is supposed to be bad, not hot. Oh well, I’ll just blame it on my characters. So I took a long walk and let the ideas percolate.

I really had a hard time with writing this story because in order for Tony and Bradley to fall in love, I had to bend the rules until they shattered. I realized the only person keeping them apart was me. Once I figured that out, the only thing I had left to do was let go and fall into the abyss.  It was a long and bumpy drop but I enjoyed every second of the free fall. I hope you enjoy it too!

Thank you for having me by! 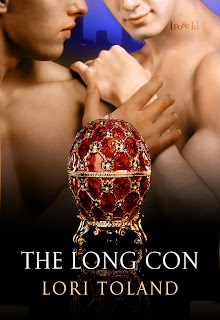 THE LONG CON by Lori Toland

My heart pounded, and I panted from exertion. Replete and relaxed, I knew my weight crushed him to the bed, but if he didn’t say anything, I wasn’t moving. I dropped a gentle kiss on his shoulder, tasting the salt from his skin when I licked my lips.

I opened my mouth, and my heart slammed against my rib cage when I realized what I had just been about to say. Before blurting out my love for him, I pulled out slowly and stood.

I needed to get my shit together and remember I was on a task, one of huge importance to Margaret. I took a deep breath and let it out. When he glanced at me over his shoulder, I put on the same mask I wore around everyone.

His eyes told me he saw beneath the surface, and that scared me. He was much too perceptive, and from this moment forward, I would have to be on my guard. “Are you okay?” he asked.

“Yeah. You almost killed me there.” I laughed it off, but it felt hollow to me. I left him on the bed and walked into bathroom.

I threw away the condom, and when I turned around, Tony stood in the doorway.

“Are you sure?” he asked, his frown worrying me.

I wanted him to drop it, so I just smiled and placed a kiss on his lips. “I’m sure.”

My explanation didn’t seem to satisfy him, but I didn’t stick around to give him the time to question me about it. I flipped on the shower and waited for the water to heat up, a little perturbed about how much I wanted him.

A $25 Amazon GC to a randomly drawn commenter from the entire tour.

-Giveaway is OPEN TO EVERYONE!
-To be entered, MUST leave a comment, along with your email addy.
-One commenter will be chosen randomly from all comments made throughout the tour, so the more tour stops you make a comment on the greater your chances of winning.  A list of all participating blogs can be found here.
-Giveaway ends at 11:59 PM CST on 5/4.
at May 03, 2012