Review for My Wicked Gladiators by Lauren Hawkeye 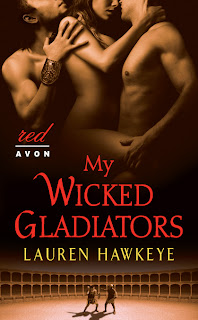 Alba has spent her entire life pleasing others.

As an upper-class plebeian woman in Ancient Rome, that is her place in life. But when her husband Lucius, the owner of a prestigious gladiatorial school, uses her body as a bargaining tool to increase his fortunes, she is faced with doing as he demands, or finding herself on the street.

Forced to lay with masked gladiators chosen by Lucius, Alba is surprised to discover pleasure in being powerless. Only in the forbidden arms of Caius and Marcus does she find comfort, however temporary it may be.

But with Lucius’ demands looming and the threat of death for her gladiators ever-present, will Alba’s fleeting pleasures be enough? Or will Alba finally grab hold of her happily ever after, no matter the consequences?

As a big fan of the tv show Spartacus I was immediately drawn to this story and as the pages were turning I became even more immersed in the world and characters Ms. Hawkeye created.  From the descriptions of the city, the clothing, and the social and political hierarchies, the images conveyed were extremely realistic and drew me in even deeper and made for an extremely satisfying read.

Alba has always been a dutiful wife but has slowly come to realize that her life and marriage isn't as satisfying as she thought.  When her husband is thought to be sterile, and with their fortunes in dire need of an heir, he devises a plan that has her getting up close and personal with sexy gladiator Caius in hopes of conceiving.  As if this isn't emotionally difficult enough, Alba's feeling sexually and emotionally drawn to yet another gladiator, their ludus' champion Marcus.  These two men have made her feel more cherished and fulfilled than she's ever felt before.  As she sees her husband Lucius becoming more uncaring of her and others in his household, she knows she needs to make a change and take what society says she shouldn't have.

As this story is written in the first person we get to know Alba quite well and seeing her go from meek and dutiful to assertive was very satisfying.  She was a lonely woman with no real friends in their social circle because she detested their superficiality and their poor treatment of the slaves.  The only people she opened up to were her personal slave Drusilla and her two gladiators/lovers.  I can understand why then she'd sacrifice everything for this small group of people who were more of a family to her than her own husband and relatives.

I enjoyed the characters of Caius and Marcus but didn't feel as connected to them because we never get to know their inner thoughts.  Their both loyal and strong and have different and highly appealing characteristics to meet all of Alba's emotional needs as well as their own when they're together.  Drusilla too is a likable character and as her story progressed I felt emotionally drained.  There are plenty of unlikable characters as well.  Lucius is a manipulative, uncaring man who will do anything for money.  His secrets make him even more reckless and I wish his ending would've been more punishing.  A noble woman, Hilaria, is anything but.  She's truly vile and twisted and I cringed everytime she came on the scene.  She would've been a perfect match for Lucius.

The tv show Spartacus definitely influenced this story in small and subtle ways.  A character from the show is spoken of as well as what befalls him.  Spartacus' rebellion is mentioned and easily invoked images from the tv show as well.  There's lots of sex and violence in this story which isn't surprising considering the time period.  There's m/m, m/f, and m/f/m as well, with each of these sexual interludes being extremely graphic and steamy.

This was an entertaining story with loads of action and romance.  While the first person perspective doesn't allow for full insight into all the characters, I was still fully invested in their outcomes.  The ending of the story, while extremely satisfying, doesn't seem too plausible to me but with the happiness of my favorite characters at stake I'm not going to quibble.  Ms. Hawkeye has created an entertaining story and if she decides to revisit this world again I'll definitely be along for the ride.

*I received this book from the author in exchange for my honest opinion.
at May 20, 2012