Review of Bloodstorm by Amber Kallyn 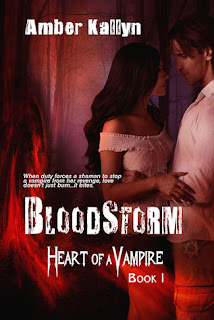 When duty forces a shaman to stop a vampire from her revenge, love doesn’t just burn... it bites.

For two hundred years, Niki DeVeraux has been tracking the monster who murdered her family and made her a vampire. She finally catches up to him in a small Arizona town, only to face more than she bargained for. Amid an imperious vampire King, a shaky truce between the local clan and shifter pack, and a too-sexy sheriff who makes her remember she’s still a woman, Niki’s single-minded purpose is threatened for the first time since her turning.

Between his duties as Keeper of the peace for the Magic Council and heir to his tribe’s shamanistic magic, Sheriff Shane Spencer’s job is to protect humanity and stop the friction between the local Arcaine races before it turns into an all out blood war. To make matters worse, there’s an irresistible rouge vampire in town enflaming his senses.

When wolves start turning up dead, the tension between the paranormal races grows and suspicion falls on Niki. Shane knows she’s not to blame, and it has nothing to do with the primal urges she stirs within him. Working together, they must find a way to stop the hostilities from going over the edge. Trouble is, the desires raging between Niki and Shane might prove more dangerous than the surrounding threats.

As a fan and frequent reader of the vampire genre you'd think I wouldn't come across any new ideas of the vampire mythos.  Amber Kallyn's vampires proved me wrong as they can walk in daylight and live on both food and blood.  Niki DeVeraux subsists not only on food, but on revenge as well.  She's on the hunt for the vampire who turned her after killing her family over 200 years ago.  Her recent run-in with her sire has led to a small town where there's an uneasy alliance between wolves and vampires overseen not only by the King and Alpha of each group but also Sheriff Shane who's a shaman and Keeper of the peace over all paranormal creatures within the area.

This was a fast-paced story that flowed along nicely with exciting action sequences and a satisfying build-up of sexual tension leading to steamy sexual encounters between the main couple.  Niki is a likable heroine full of sarcasm and brute strength.  Badass is her middle name, but after meeting Shane her heart starts unthawing and she soon starts becoming obsessed with more than just revenge.  Seeing her blush and be caught off guard by love was refreshing and brought out an interesting facet to her character.  Shane too was likable with the weight of the world on him.  I'm intrigued by his powers and their connection to the Earth.  I enjoyed the give and take between Niki and Shane and seeing her finally have someone to lean on was a heartwarming sight after her years of loneliness.  Their sexual interludes were both sexy and sweet and the connection between them was palpable.

There are many secondary characters that bode well for the future of this series.  A secondary story involving Shane's older brother being passed over to receive the shaman powers, the vampire King Jordan, as well as newly turned sheriff's deputy Chase all left a lasting impression on me and have me excited for their stories to be told.  You too will find lots to like in this first, in what I hope is a long lived series, book that is full of action and an undercurrent of impending war.  So get in on the ground floor of this intriguing new series that adds some new twists to old myths and get a copy of Bloodstorm.

*I received this book from the author in exchange for my honest opinion.
at May 12, 2012