Review for A Little Harmless Fascination by Melissa Schroeder 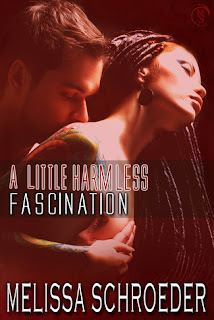 Wanting her isn't smart, seducing her is inevitable, but falling in love with her could be downright deadly for both of them.

Security expert Conner Dillon isn’t a man who often takes a vacation. So when he is ordered to take a month off and his sister insists on a trip to Hawaii, he isn’t very happy. But, after seeing his landlady Jillian Sawyer again, he might just find something—or someone—to occupy his time.

After one night in bed, they both find themselves addicted. In Jillian, Conner has found the perfect sub…and in him she finds someone she can trust. Falling in love isn’t what they expected, but walking away is impossible—especially when they realize someone wants Jillian dead.

WARNING this book contains the following: An uptight security expert who prefers schedules, a romance writer who does not, tattoos, a trip to the Aloha Swap Meet, two hunky neighbors who irritate our hero, Hawaiian scenes, and of course this would not be a Harmless book without a trip to Rough 'n Ready. Ice is recommended as any Harmless Addict will tell you, but the author takes no responsibility if a reader should become overheated. Read at your own risk.

The BDSM club Rough N' Ready makes another appearance and becomes a meeting point for old characters and one or two new ones.  The mysterious Aussie Eli continues his brief yet intriguing appearances that have me dying to hear his whole story.  Along with the likable secondary characters comes our main hero and heroine who appear to be exact opposites but actually make a perfect match.  Conner's rather uptight and overly obsessed with business which has led to a medically necessitated vacation to Hawaii.  He's loyal and willing to give up everything for family, strong both physically and mentally and the quintessential hero.  Jillian's a free spirit with tattoos and piercings that don't normally appeal to Conner, but everything about her appeals to him and she ends up being just what the doctor ordered.  Like Conner, she lost her parents at an early age but didn't have the close-knit feeling of family he did.  Her family is racist with many vices that have led to her being the odd man out.  Conner gives her that feeling of family, always has since the first day they met.  So their coming together now feels natural and believable in how quickly things evolve into the bedroom.  The sexual interludes are intense and nicely spaced throughout the story, but for Conner being a serious Dom these scenes are extremely lite in that department.

The danger to Jillian appears very late in the story and felt a bit tacked on.  The identity of the villain was a well-kept secret with a very believable red herring thrown in to keep it interesting.  This part of the story allowed for a slew of new characters to be introduced.  Of particular interest is Jillian's sexy neighbors/lovers Mick and Alex and I look forward to their menage story with yet another neighbor.

All-in-all this was an enjoyable story full of sexual tension and satisfying steamy sexual interludes.  The hero and heroine are a great match and their differences brought out interesting facets of each other.  There are plenty of appealing secondary characters as well that have me looking forward to the continuation of this series.  So here's to my continuing fascination with the Harmless world Ms. Schroeder has created!

*I received this book from the author in exchange for my honest opinion.
at May 10, 2012