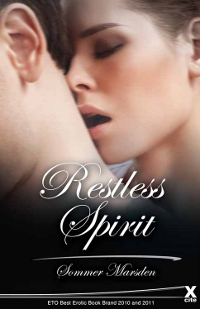 Tuesday Cane walks out on her life and her abusive man when she inherits her grandmother’s house at Allister Lake.

There she finds plenty of distractions to take her mind off her loss with her sexy neighbour and handyman Shepherd, former TV star Reed and her old flame Adrian.

But , as time passes, she senses that something is not quite right with her new life. And no amount of steamy sexual encounters can hide her anxiety.

I've not read many of Ms. Marsden's books, but as a reader who enjoys steamy reads, I found that what she's created meets all my steamy needs.  From start to finish we're presented with three very different yet sexy and appealing men all trying to win the heart of mentally weakened through abuse by her ex, Tuesday Cane.  This leads to numerous sexual interludes that become more and more intense as the story progresses.

Tuesday is a character that I both liked and was annoyed by.  I admire her leaving her abusive ex and showing strength when her life is put at risk by a crazy stalker, but I felt she was using each of these men for almost the entire story by sleeping with all of them repeatedly.  I know she's committment-phobic, but her actions lessened my favorable impression of her.  Each of her suitors were appealing for a variety of reasons.  Aidan was heroic, loyal, and protective.  Reed was charming and carefree and could financially support her in comfort.  Shepherd was mysterious yet understanding of Tuesday's dark needs since he's of the same mentality.  He allowed her to be strong and never judged her.  I can understand her dilemma considering how tempting all three of them are.

The issue with the stalker was subtly introduced with the perpetrator well concealed as the feelings of danger and paranoia believably escalated.  His capture occurred quickly with this storyline wrapped up a bit too quickly and neatly.

*I received this book from the author in exchange for my honest opinion.
at May 11, 2012