Review for Possession by Melissa Schroeder 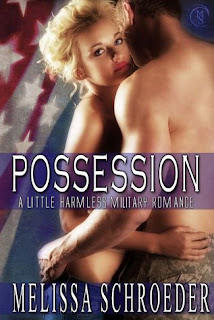 Loving a military man isn't always easy and sometimes living with him is impossible.

Deke Berg has been in love with Samantha for ten years. From the moment they met, they could never keep their hands off each other. Their marriage was volatile and short-lived, and they were both much too young. Now, though, Deke knows what he wants in life, and Samantha is at the center of his plans. Unfortunately, Samantha is wary of the marriage-espcially to a man who broke her heart.

Sam has always loved Deke. Being a former military brat, she thought she'd been prepared for life as a military spouse. But the long separations were hard, especially dealing with the stranger who returned home. When she asked him to choose, he left and she tried to move on. She doesn't know if she can handle that pain again, but after spending a night together in Hawaii, it's impossible for her to ignore him.
Old prejudices and painful memories aren't easy to overcome, but there is one thing Deke understand: Samantha is his woman, and he will do anything to prove his love and win her back.

Warning, this book contains: Another hard headed military man, a few embarrassing moments, nosey brothers, and two people too stupid to realize they are perfect for each other. It's Harmless and military, so for your own safety make sure there is ice water nearby. The author assumes no responsibility for overheating the reader.

In Melissa Schroeder's latest release in her A Little Harmless Military Romance series we return to Hawaii to try to reunite former married couple Deke and Samantha who never fell out of love and have trouble keeping their hands off each other whenever their close to each other.  Not only do we see their struggle to put past misunderstandings behind them, but we get to see many secondary characters from previous books as well as meeting new and exciting characters with their own paths to love starting out rocky.

Deke is a strong willed hero who always tried to do what he thought best.  After a recent mission went bad he realizes he doesn't want to waste another minute away from Sam and goes after her wholeheartedly.  He's the epitome of heroic and sexy to boot.  His actions showed a more thoughtful and mature partner in his relationship with Samantha.  Samantha seemed young and easy to anger in her interactions with Deke.  While I adored his character, I found her a bit melodramatic and overly emotional, which left me annoyed by her at times throughout the story.

This was a straight forward pleasant read with no big misunderstandings.  The hero is extremely likable and delectable and went above and beyond the call of duty to make the woman he wants happy.  Many secondary characters are introduced that have me excited for future books in this series with the subtle set-ups seen here.  All-in-all, another satisfying installment to a series ripe with promise!

*I received this book from the author in exchange for my honest opinion.
at May 31, 2012