Readers will find themselves drawn to this historical romance of a young woman once determined to marry the man of her dreams who now pushes him away in hopes of keeping her secrets hidden while he's determined to make her his.  Keep reading to get a tempting taste of The Secret Life of Miss Anna Marsh by Ella Quinn, get even more insight into this book by visiting the other sites hosting this tour, then add it to your bookshelf.  In honor of this second installment in The Marriage Game series make sure to fill out the form below for the chance to win a $25 Amazon GC too! 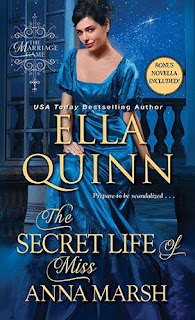 Now available in print for the first time, USA Today bestselling author Ella Quinn's second installment in The Marriage Game series is a witty, romantic historical tale about a young lady who must choose between her head and her heart...
Since she was a young girl, Anna Marsh has dreamed of Sebastian, Baron Rutherford asking for her hand in marriage. But that was in another life when her brother Harry was alive, before she vowed to secretly continue the work he valiantly died for. Now as Sebastian finally courts Anna, she must thwart his advances. Were he to discover her secret, he would never deem her a suitable wife...
Sebastian has always known Anna would become his wife someday. He expects few obstacles, but when she dissuades him at every turn he soon realizes there is much more to this intriguing woman. Somehow he must prove to her that they are meant to be together. But first he must unravel the seductive mystery that is Miss Anna Marsh...
EXCERPT:
Rutherford regarded the large, buff, fair-haired gentleman with a sapient eye. “What is it you need me to do?"
“We think we’ve a bit of a problem in your area of Kent.” Jamison glanced through some documents on his desk. “All along the coast actually. You’re not the only one we’re calling in.” His bushy brows drew together. “We’ve heard rumors out of France that some of Napoleon’s former officers might take up his cause. I’ve no doubt they’ll be trying to run information through the smuggling gangs. That’s where you come in.” Jamison put his elbows on his desk and leaned forward. “Harry Marsh used to keep track of the smugglers in your area. You’ll have to do it now."
Rutherford frowned. “I thought they’d disbanded. That was the reason Harry could leave to work elsewhere."
Jamison shook his large head. “No, my boy. Harry had got someone else to take them over. Never told us who it was. All he said was the man was responsible and would have good control over them. After all, it was only to have been for a few months."
Rutherford leaned back in his chair and blew out a breath. “I wonder who? I’ll have to scout around and try to find out who the smugglers’ head man is. Harry always took the lead with them. I went a few times, but I’m not even sure they’d remember me.” Rutherford sat up and scowled. “I wish to hell he’d stayed and not gone over to France."
The only good thing to come of this was that he would be able to escort Anna home after the wedding ceremony. He wondered how she’d take that bit of news and decided not to tell her until they were already at Marcus’s family’s estate. 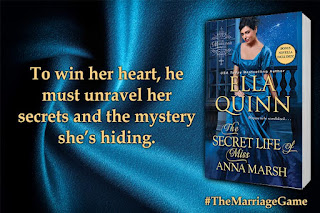 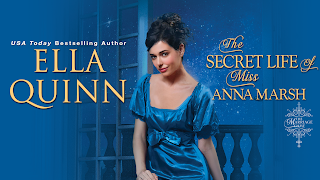 AUTHOR INFO:
USA Today bestselling author Ella Quinn's studies and other jobs have always been on the serious side. Reading historical romances, especially Regencies, was her escape. Eventually her love of historical novels led her to start writing them.
She is married to her wonderful husband of over thirty years. They have a son and two beautiful granddaughters, and a Great Dane. After living in the South Pacific, Central America, North Africa, England and Europe, she and her husband decided to make their dreams come true and are now living on a sailboat. After cruising the Caribbean and North America, she completed a transatlantic crossing from St. Martin to Southern Europe. She's currently living in Germany, happily writing while her husband is back at work, recovering from retirement.
Ella loves when readers connect with her.
WEBSITE  |  FACEBOOK  |  TWITTER  |  GOODREADS AUTHOR PAGE  |  BOOKBUB  |  AMAZON AUTHOR PAGE
**********GIVEAWAY**********
a Rafflecopter giveaway
at December 09, 2020