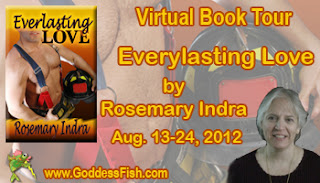 I LOVE a sexy hero who puts his life on the line for others.  Seeing those selfless acts of bravery makes them even more appealing than those rippling abs all that hard work creates.  With Everlasting Love by Rosemary Indra, we're introduced to a firefighter fighting to keep his new love safe from her crazy ex-husband.  Rosemary's here today talking about why we love men in dangerous jobs as well as giving us a glimpse into her new book.  Coffee fanatics will also get the chance to get their fix with an awesome giveaway.  So let's welcome Rosemary and learn more about her exciting new contemporary book.


The appeal of heroes in dangerous professions.....

In order to maintain the dangerous profession the hero must be powerful and strong. The hero has inter-strength as well as a muscular body. He thinks fast and able to make quick decisions. They live by a code of ethics: loyalty, honesty and justice.

In the case of the firefighter hero and their dangerous profession. It ranges from entering burning buildings to crawling into crushed vehicle to help injured people. Firefighters watch over each other, putting their very lives in each other’s hands, ready to back each other up on a moments notice.

They are protective toward their family and will do anything to insure their safety. This type of hero’s strength does not overpower the heroine. He brings the needed spark to the heroine’s life. Underneath they’re rough exterior the hero has a tender side he only reveals to her.

These heroes are daring but don’t take unnecessary risk. As my hero Kevin Mathews says to Miranda Cummins, the heroine in Everlasting Love, “I love you. I’m not going to do anything foolish which would hurt me or jeopardize our relationship.” 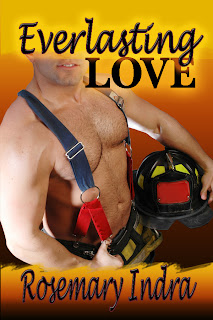 When Miranda Cummins borrows a friend’s cabin to finish writing her long overdue book, she’s surprised to find the one-room retreat already occupied by Kevin Mathews. Though she feels a spontaneous attraction for Kevin, Miranda has recently escaped a controlling husband and isn’t ready for a long-term relationship.
Unsatisfied with his occupation, Kevin is at a crossroads. Miranda understands and encourages him to look at the direction his life is going. Fired up by her encouragement, Kevin returns to Forest Ridge to resume his firefighting career.
When Miranda is threatened by her ex-husband, Kevin realizes he will do anything to protect her. Miranda has shown Kevin a new passion for life. Can he fan the flames of passion into an Everlasting Love?
EXCERPT:
Miranda Cummings inhaled the fresh fir scent the moment she opened the door of her Chevy Impala-the fragrance of freedom. The cold, crisp air bit at her warm cheeks yet she felt exhilarated. Gravel and slushy snow crunched under her shoes as she hurried around her car. Opening the passenger door she picked up her overnight bag and placed the strap on her shoulder then she added her computer bag. Not wanting to make another trip out in the cold, she hooked several grocery bags on each hand. With one swift hip movement, she closed the door.
Gingerly she walked up the three snow-covered, wooden steps to the deck. Focusing on her weekend of solitude, she quickened her pace to the cabin on her right.
“Can I help you?” a deep baritone voice startled Miranda causing her to fling her arms out and drop one of her grocery bags.
Intent on carrying her belongings into the cabin, she hadn’t seen or heard the man behind her. Turning around, she froze. Reclined in an old-fashioned, white cast iron bathtub with claw feet, the man appeared relaxed, content and not at all perturbed as he bathed on a deck outside.
Steam rose from his warm water into the cold air. Water dripped from his short brown hair and glistened on his muscular torso. She suppressed the desire to caress the breadth of his wide shoulders. Stubble darkened his face with a day’s growth of beard. His rugged good looks caused her heart to flutter.
“I must have made a wrong turn…“ She couldn’t tear her gaze from his broad chest. As the water droplets traveled down his body her gaze followed suit. Miranda realized the hunk of a man was not only tranquil but also very naked. His muscular arms, which rested on the edges of the tub, could easily wrap around her. She wanted to feel his strength, his support from those strong arms. “…somewhere,” her voice squeaked.
He reached down and picked up a can of beer, which sat on the deck. Tipping the can back he took a swig then set the beer beside the tub. “Where were you going?”
His pecks rippled when he moved. Look at his face not his chest, Miranda scolded herself. “A friend of mine has a cabin up here.”
She glanced at the A-frame structure to her right nestled in a grove of fir trees where she’d intended to spend a couple of nights off the beaten path. Flower boxes below the two paned windows held browned plants from winter’s frost. The plumbing’s primitive her friend had said, which would explain a bathtub on the deck. The cabin in front of her fit her friend’s description. 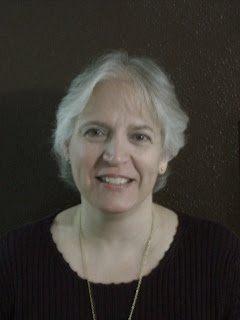 AUTHOR BIO:Ever since her mom gave her a romance book when she was a teenager Rosemary has enjoyed happier-ever-after stores. She has been writing most of her adult life. When she’s not writing, she enjoys spending time with her family, reading and crafts.She has two grown children and four adorable grandchildren. Her and her husband live in a small town in Oregon.www.rosemaryindra.com

Rosemary will be awarding a signed cover flat to a commenter at every stop and a $20 Starbuck's GC and their name in her next book to a randomly drawn commenter during the tour.
-Giveaway is OPEN TO EVERYONE!-To be entered, MUST leave a comment, ALONG WITH YOUR EMAIL ADDY.-One commenter will be chosen randomly from all comments made throughout the tour, so the more tour stops you make a comment on the greater your chances of winning.  A list of all participating blogs can be found here.-Giveaway ends at 11:59 PM CST on 8/24.
at August 14, 2012