Book Spotlight on When a Cowboy Loves a Woman by Jennie Marts (GIVEAWAY)......

Two people with bruised hearts find an unexpected attraction in a slow-burn romance of starting over and embracing new love wherever you're lucky enough to find it.  Keep reading to get a tempting taste of When a Cowboy Loves a Woman by Jennie Marts, then add it to your bookshelf.  In honor of this second installment in the the Creedence Horse Rescue series make sure to fill out the form below for the chance to win 1 of 5 copies of the first book in this series too! 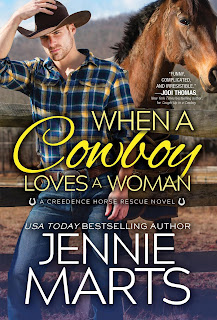 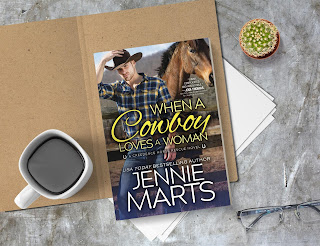 BUY LINKS:  AMAZON  |  BN  |  iBOOKS  |  KOBO  |  BOOKSHOP  |  BaM  |  BOOKS2READ
AUTHOR INFO:
Jennie Marts is the USA Today bestselling author of award-winning books filled with love, laughter, and always a happily ever after. She is living her own happily ever after with her husband, two dogs, and a parakeet that loves to tweet to the oldies, in the mountains of Colorado.
**********GIVEAWAY**********
a Rafflecopter giveaway