A woman of wealth, who turned her back on her privileged lifestyle, finds herself connected in the public's eye to a rich and sexy owner of a hockey team who's willing to do anything to make her his.  Keep reading to get a tempting taste of Olivier by Brenda Rothert, along with my impressions of it, then add this ninth and final installment in the Chicago Blaze series to your bookshelf too! 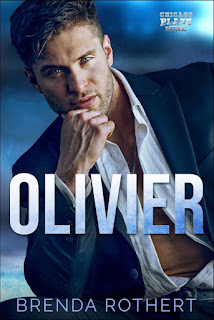 Daphne
I knew who I was before Olivier Durand came along. Despite growing up among the privileged elite, I never cared about corporate ladders or dream weddings. I proudly wear the label of social justice warrior. Until a car accident changes everything overnight. A video goes viral: Chicago’s Hottest Bachelor, billionaire Olivier Durand pulling me from my burning car. When he sets his sights on me, the whole world is watching. He can chase after me all he wants, but my answer will be the same: I loathe the ultra-wealthy. Even when they’re handsome, persuasive and...I have to admit, charming. It’s a hell no from me, though. Until suddenly, I’m not sure I’m the woman I thought I was.
Olivier
Now I know how the players on the NHL team I own must feel. Relentlessly hounded. Once the video of me pulling a woman from her burning car goes viral, privacy becomes a thing of the past. For whatever reason, Twitter has collectively decided this woman and I should become a romantic thing. A hashtag combining my name with hers is trending daily. Absolute nonsense. But then I meet her, and realize Twitter got it right. Daphne Barrington is beautiful, funny, brilliant and sweet. Now I just have to convince her to date me. Easier said than done. She’s maddeningly stubborn, and my deep desire to be with her soon has me writing massive checks. Not for jewelry or cars, but to charities. Winning Daphne’s heart is going to cost me, and I’m not sure even I have enough money to do it.
FIND AT GOODREADS here.
BUY LINKS:  AMAZON  |  iBOOKS  | KOBO  |  BN  |  GOOGLE PLAY 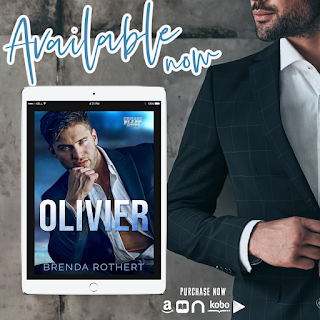 MY IMPRESSIONS OF THIS BOOK:
Through eight previous books Ms. Rothert has crafted an entertaining series of sports romances set in the hockey world.  With its sexy hockey players (each with a delicious personality) and the discovery of their better halves through romances that utterly charmed me, this series has captivated me from its very first release with the characters becoming like family.  With this ninth installment everything comes full circle and by the turn of the final page I was left satisfied with an ending tied up with a nice bow.
Olivier Durand has been on the outskirts of the Chicago Blaze hockey world from the very beginning, a delicious temptation always there when his players need him.  He's a man of wealth who, from the outside, seems to have a life of ease.  The real man though is much deeper, a loyal man who's worked hard for everything he has.  He's a kindhearted single father too, raising his daughter with the strong ethics he has in a relationship that endeared him to me.  Arriving on the scene of a car accident changes his life irrevocably though, introducing him to the one woman he can't easily attain in a combustible connection that builds with each turn of the page.  Olivier is a drool-worthy hero, one happy being in the background, and it's clear that he's a bit uncomfortable with the notoriety of saving Daphne.  Meeting her though creates all sorts of sparks, has him wooing her in ways he's never had to before.  With her, the way to her heart isn't through fame but through his good heart on display throughout their journey to HEA.
Daphne Barrington comes from a family of wealth, but turned her back on it long ago. She now devotes herself to helping others, looking down on those who flaunt their wealth, in a satisfying life that shows her generous heart.  The day she's rescued from her burning car though is the day she's introduced to a man who isn't who he seems.  Though her savior is a billionaire he's not the arrogant, uncaring, person of wealth she's known throughout her life.  Through his sweet and sensual wooing he slowly works his way into her heart.  Through donations to her favorite charities, and heartfelt conversations, they discover the substance beneath the surface of each of them in a romance that was a delight to see grow.
The road to romance is a hard-fought one due to Daphne's past.  Feeling betrayed by her ex, and by her parents, she clearly has a wall around her heart.  The biggest support she has is that of her grandmother, a larger than life elderly woman who often made me smile.  Daphne's caution meant that Olivier had to be at the top of his game...but it's clear that he's ready to play to win, wooing her in an unconventional manner that was charming.  This pair was a great couple whose first meeting was unforgettably explosive. From there they settled into a sweet and sexy journey of getting to know each other, a journey that had a nice flow and virtually no angst.  On a whole this was a great way to spend the afternoon...lost in a sweet dream of love and HEA for two very likable people. Along with this appealing main couple were equally delightful glimpses of past characters, players and their mates who acted in support of a man deserving of their loyalty.  Through each new release the Chicago Blaze series has been immensely satisfying, and though I'm said to see it end, it ended with a wonderful conclusion that has me excited for what Ms. Rothert has planned next!
My rating for this is an A-
*I got this book from the author for review in exchange for my honest opinion.

AUTHOR INFO:
Brenda Rothert is an Illinois native who was a print journalist for nine years. She made the jump from fact to fiction in 2013 and never looked back. From new adult to steamy contemporary romance, Brenda creates fresh characters in every story she tells. She’s a lover of Diet Coke, chocolate, lazy weekends and happily ever afters.
WEBSITE  |  FACEBOOK  |  TWITTER  |  PINTEREST  |  WATTPAD  |  AMAZON AUTHOR PAGE
at April 30, 2021