An ex-con who lost his freedom in defense of a young girl finds an unending connection to her that might be the only thing to save his heart and soul once he's free in this gritty romance that will keep readers glued to the pages.  Keep reading to get a tempting taste of Jailbait by Lani Lynn Vale, along with getting my impressions of this third installment in the Souls Chapel Revenants MC series, then be sure to add it to your bookshelf! 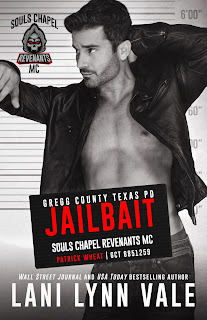 The first time I saw her was across the room at a bar. I had no idea at the time that she was only sixteen. All I knew was that she was beautiful, she was sending me do-me vibes from across the room, and I was fresh off a deployment where there’d been nobody but men for nine of the longest months of my life.
The second time that I saw her was at a court hearing that would decide how long I’d be sent to prison for. She was a cute little curly-haired blonde with wide, expressive eyes, a banging body, and the reason that I’d gone to prison in the first place.
The third time I saw her was through a glass divider of the prison visitation room as she waited for her stepfather, my lawyer, to tell me how sorry he was that he lost my case. Especially when I’d been the one to kill the man that was about to kill his daughter.
The last time, the time that I decided enough was enough, was when I saw her at my bar eight weeks after I’d been set free.
Unlucky for her, I’d stopped being a good guy about two seconds after those bars closed behind me twelve years ago. Now all that was left was a shell of a man that didn’t see the good in anything.
Anything except for her.
FIND AT GOODREADS here. 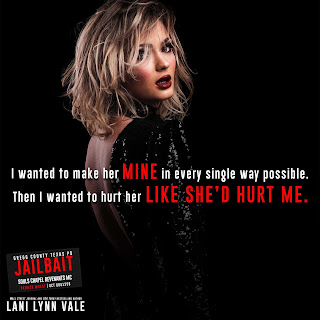 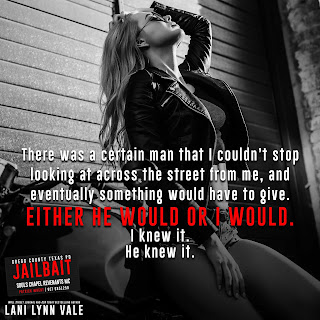 MY IMPRESSIONS OF THIS BOOK:
Ms. Vale continues to be my go-to author when it comes to MC-fueled romances courtesy of her compelling characters, steamy interactions, and intensely emotional pairings set amidst a gritty world of action and suspense.  This latest release grabbed me from the very start with an unforgettable first meeting that laid an epic foundation between a young woman trying to break free from her father and a veteran whose one good deed changed his life irrevocably.  The twelve years that have passed since their explosive first meeting were fraught with pain, disillusionment, and decisions that utterly changed them.  But it's clear that it was a journey that was meant to be and it kept me wholeheartedly rooting for this admirable pair to get their richly-deserved HEA.
Readers will fall for Trick the moment they meet him as he's a truly good guy, a caring and supportive brother/son, and a good friend who (for just one time refuses to let his friend get the girl) wants one night just for himself before sacrificing his plans for his family.  Little does he know though just how much he'll be sacrificing for the young woman who captivated him from the very start!  After a prison stint resulting from protecting the addictive young woman, Trick is a bit changed upon leaving prison.  He's a bit angry, a bit bitter, frustrated by the raw deal fate served him.  He's also angry with himself over his unrelenting attraction to that young woman...a woman who's now living across the street from him.  Even though he blames her for all his lost years, he can't deny that he still wants her.  In a journey of second chances, a journey full of angst and sexual tension, he wants her and makes it clear that she'll be his.  Trick's a sexy beast, a man hardened by his prison stint, who still shows a caring and protective side.  In scenes with his sister he's especially protective and it endeared him to me all the more.  Through each high and low, through each hard fought moment of happiness, and through each steamy encounter Trick oozed sex appeal along with a true and honest heart of gold.  He was a tarnished hero definitely, but a hero nonetheless and I was completely drawn to him and his epic second chance romance.
All it took was one event to change a life completely....and for exotic young woman, Swayze, that event was an life-altering meeting with a just returned veteran.  Theirs was a crackling connection from the moment they laid eyes on each other and I loved seeing the first steps to what promised to be a powerful romance.  Despite her strong will and commanding presence Swayze's life wasn't an easy one.  But during that short interaction with Trick things were looking good and felt right.  In the blink of an eye though it all went bad and it led to 12 years of guilt weighing on her.  It also led to personal changes that had her focusing on becoming a lawyer.   She decided to make it her mission to help those who needed help most, to right blatant wrongs, in an empowering journey that shows her to be a kickass heroine.  Despite her sweet and sunny looks she's a heroine who men should never underestimate as she's a real spitfire.  She's a woman who knows who and what she wants...and after 12 years of waiting it's Trick she wants in a second chance at HEA that pulled at my heartstrings.  Swayze's an immensely likable heroine, one who could've left her past behind, but who stayed to support the man who protected her.  Theirs isn't an easy journey as there's years of anger still weighing on him, but their connection can't be ignored and the sizzling push/pull between them held me captive.
This was an epic romance from the first page to the last depicting an unforgettable connection almost broken by fate (and 12 years apart) before their romance rose from the ashes like a phoenix.  It's an emotionally intense connection that frustrated me a time or two, occasionally made my heart ache, all while pulling me into this pair's hard-fought journey to HEA.  Trick and Swayze were a wonderful couple, a match made in Heaven, who were clearly meant to be from the very beginning.  In scenes that were teeming with sexual tension, crackling with their strong wills, I was rooting for them every step of the way while their connection to the rest of the Souls Chapel Revenants members was seamless.  I enjoyed seeing more glimpses of the other members of this MC, loved getting more clues as to what this MC is and what its goals are, and am particularly drawn to Lynn (the man who's been finding members for the club).  I was also drawn to Beck, Six, and Hunt as their brotherly and protective sides showed through to have me counting down the days until their stories take center stage. This second chance at romance was a journey full of heart and soul, a journey full of danger too courtesy of the easily expendable bad guys, and it's one I highly recommend to others as Ms. Vale has crafted another winner!
My rating for this is an A.
*I got this book from the author for review in exchange for my honest opinion. 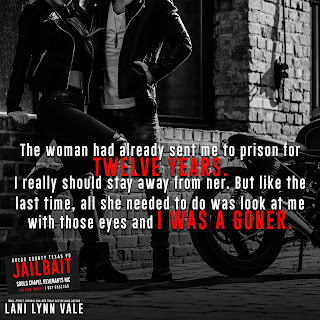 AUTHOR INFO:
Lani Lynn Vale is a Wall Street Journal & USA Today Bestselling Author of over thirty titles. She is married with three children, two dogs, two cats, a donkey, and a couple (a couple also meaning over twenty) chickens.
When she’s not writing, you can find her curled up in her favorite chair reading. Lani is married with three children and lives in the Great State of Texas.
WEBSITE  |  FACEBOOK  |  INSTAGRAM  |  TWITTER  |  GOODREADS AUTHOR PAGE  |  BOOKBUB
at April 09, 2021