Book Cover Reveal for Fade Into You by Elle Greco.....

The widow of a rock star tries to make a living with a reality tv gig, but instead finds an unexpected connection to another rock star looking to create waves in a combustible tale that touches on issues of drug abuse and finding HEA behind the facade of fame.  Keep reading to get a tempting glimpse of Fade Into You by Elle Greco, then start counting down the days until this fourth installment in the LA Rock Star Romance series hits bookshelves on April 29th! 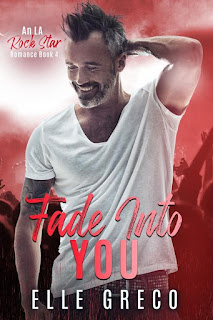 It's all fun and games until someone falls in love.
Six years after the cops found Ear Assassins’ lead singer dead of a drug overdose, his widow Lydon Johnson has only just begun to pick up the pieces. Now she finds she’s fast running out of money to support herself and her son. A reality TV show is an unappealing means to an end, but in the interest of keeping a roof over their heads, she signs on. But the producers soon find out, Lydon’s kind of boring for a rock and roll widow.
Vince Davis, lead singer of Anthem, is a rock and roll legend two decades in the making. But when the head of his longtime record label is exposed as the cause of his son’s drug overdose, his attempt to split his band from the label comes with a personal cost that he’s not sure he’s ready to make.
Enter Lydon. Vince has an idea to spice up Lydon’s flailing reality show: pretend to be lovers. Thrust back into a glowing spotlight, can Vince’s amped star power get Anthem out of their contract on his own terms?
The reality TV producers think it’s a match made in rock and roll heaven. What could possibly go wrong?
When you hate the person you are supposed to fall in love with, LOADS.
EXCERPT:
Vince accommodated a lot from the media. Hell, he basked in their attention. There weren’t too many off-limits questions in Vince-landia, and the press mostly played by the rules. Alice Monroe, the crypt keeper of Anthem’s media machine for decades, made sure of it. No one wanted to cross Alice. The woman was ruthless.
Alice, however, was not my publicist. My only protection was Vince, and he wasn’t exactly trustworthy.
Because Vince Davis was a rock god.
Alice hustled him toward another microphone while I lagged behind on the carpet. I felt exposed, just standing out there with no protection. They all wanted a sound bite from Vince, especially since his ex-wife landed a reality show that was doing “boffo” ratings, in Variety-speak. He was careful to dance around those questions.
“Lydon! Lydon!”
The shout of my name had me scanning the line of press, all crammed behind the stanchions. They all ignored me.
“Lydon, over here!”
My head twisted. Alice, looking annoyed, took me by the arm and marched me to a small, elevated table with two barstools on either side.
“Lydon, Jessica Phelps from Reality Bytes. Jessica, Lydon Johnson.” Alice pushed me down onto the stool and hissed “Play nice” into my ear before scurrying back to Vince before he got himself into trouble.
Ugh. Reality Bytes, a ghastly half-hour celebrity news show that had begun as a reality TV “news” program. While they still mostly covered the reality genre, they showed up for big red carpets to do live remotes. They had a massive viewership.
“Richard, give Lydon the microphone,” Jessica snapped at her camera guy.
Richard, a rugged-looking twentysomething with one of those hideous lumberjack beards, shoved a mic in my hands.
He gave a short count in. Jessica’s bleached smile was blinding.
“Lydon Johnson, so fun to see you here with Vince Davis.” Jessica wiggled her eyebrows suggestively. “Dying to know, who are you wearing?”
“Rhode to Ruin,” I said with a practiced smile. I say “practiced” because Vivienne made me say it over and over again while I got ready so that I didn’t forget.
“Never heard of Rhode to Ruin,” Jessica said. There was a small sneer to the words, like she was disappointed that I didn’t rate the attention of one of the big-named designers.
“I’ve always preferred to work with independent designers. Much more edge, don’t you think?”
“Of course, you are from a rock and roll dynasty, you would want edge.”
Her laugh sounded like two plastic sheets rubbing against each other.
God. I wanted to wither right there. I glanced down the press line. Vince was still holding court. It would take him at least two minutes to extricate himself from the interview and make his way over here. Two minutes felt like an eternity at these things.
That was when something hit me.
Literally.
Something sailed over the heads of the security and publicist details, landing in my lap. “What’s this?” I asked, picking up a Chanel powder compact.
A lipstick case flew over and landed on the small table before rolling off onto the carpet. “Oh, look!” Jessica jumped off her stool and started waving. “It’s Pamela Davis, from Mother of Rock.” She stopped bouncing to look at me and then at the camera, which was still rolling. “Well, isn’t this awkward! Pamela, come say hello to Lydon!”
My smile froze in place as Pamela Davis, Vince’s soon-to-be ex-wife, unsteady on her stilettos, barreled toward us.
It was like I was suspended in the tense, short moments before a train wreck, when you brace for impact because there is nothing you can do to stop it.
PRE-ORDER here.
AUTHOR INFO:
Urban Fantasy lovers will know me as Karen Greco, author of the best-selling Hell’s Belle series. My Contemporary Romance books are written under Elle Greco. (That’s me, to the right, in a Covid 19 self-portrait!)
While the genres are worlds apart, strong female characters are the chain that links all my worlds.
These women are magical. They wield wicked weapons. They play a mean drum solo. They fall in love. They rule the boardroom and the bedroom.
Whatever they do, they do it with swagger.
I love escaping into their badass worlds. I hope you do, too.
WEBSITE  |  FACEBOOK  |  INSTAGRAM  |  PINTEREST
at April 01, 2021