Book Spotlight on A Wolf in Duke’s Clothing by Susanna Allen (GIVEAWAY)......

A shifter trying to save his pack tries to woo the one woman meant to help save his people, but unfortunately she wants nothing to do with him as she's waiting to get her inheritance in this historical, paranormal romance.  Keep reading to get a tempting taste of A Wolf in Duke’s Clothing by Susanna Allen, then start counting down the days until this book hits bookshelves on April 27th.  In honor of this first installment in the Shapeshifters of the Beau Monde series make sure to fill out the form below for the chance to win 1 of 3 sets of the April 2021 book releases from Sourcebooks! 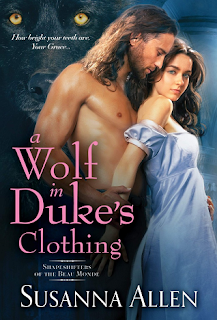