With its delicious hero, strong-willed heroine, and the gritty connection between them readers will find this an unforgettable read that pulls at the heartstrings.  Keep reading to get a tempting taste of Salvation by Nicole Dykes, along with my impressions of it, then add this emotionally intense romance to your bookshelf! 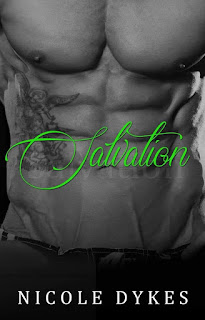 Charity
I’m in trouble. Big trouble. Not that I should be surprised. My entire life has been one huge misfortune. I have nothing and no one.
But then...Finn comes along. Gorgeous, stubborn, and infuriating.
And he can’t seem to leave me alone.
Finn
Life hasn’t been a picnic. But finally, I had it all figured out.
But then...Charity comes crashing into my life. Beautiful, unwavering, and aggravating. And I can’t let her go. 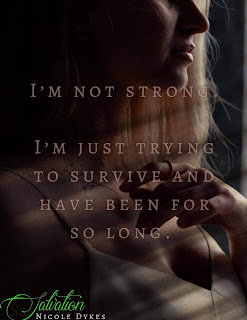 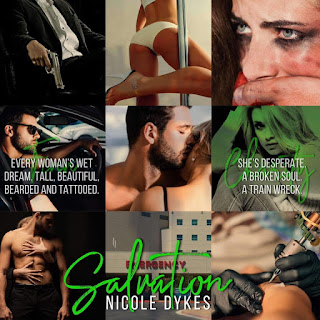 MY IMPRESSIONS OF THIS BOOK:
From the very first page this story sucked me in!  From its atmosphere of danger and desperation to its sweet and caring relationship between two people bruised by their past, this is a story that pushed all of my emotional buttons.  It's ultimately a story about relying on others, accepting love and support when it's offered, and overcoming a past that was utterly heartbreaking...and it definitely succeeds on every level.
Finn is a tattoo artist whose childhood was anything but easy.  The son of an addict, his mother filled his childhood with one humiliating act after another to get her fix.  It caused him to grow up way faster than he should have and left him with only one true friend, a friend he still has today and who he'd do anything for.  That sense of loyalty is what lands him in Charity's world with an attraction to her that he tries to ignore at first. But as she struggles to confide in him he can't help but be drawn to her in a sweet and sexy romance full of sexual tension and suspense.  Through it all Finn is a delicious hero, one who's had his own difficult childhood, but who's risen above it to make a satisfying life for himself.  He's a loyal man too, willing to go above and beyond for those friends he sees as family.  He's drawn to Charity the moment he sees her, drawn to the mutual childhood pain he sees in her eyes, and it's a slow journey to get her to open up.  But he never gives up on her, never judges her for the choices she's made, never sees her as anything but a woman deserving of care and respect, which makes him book boyfriend material in my eyes.  There was a quiet strength about him, a strong sense of caretaking, as well as alpha moments that showed a strong will.  He's a hero wholeheartedly, one with a steady and supportive nature that made me love him all the more and that has me dreaming of him still.
Charity also had a horrible childhood, a childhood that still weighs on her today.  Being stuck in the foster care system with her younger brother led to some truly painful moments, moments far beyond her control as she was just a kid too.  Running away from it when the chance presented itself didn't make the pain go away as it still weighs on her today.  Ms. Dykes' depiction of her childhood was truly heartbreaking and it had me wanting to hug both her and her brother for all they endured.  When readers first meet Charity her they see a young woman with a lot of sass, someone who wants to handle things all on her own.  Behind that facade though is a woman bruised both inside and out, a desperate woman who owes a lot of money to some very bad people.  Her choices to get out of the danger are diminishing, which is why I breathed a sigh of relief when Finn said he was going to help her.  Charity's a truly kindhearted heroine, one who desperately wants to protect those few who she cares about without worrying about the ramifications to her.  She doesn't think very highly of herself early, can only see all the wrongs in her life.  But being with Fin she slowly sees herself as worthy of happiness in a relationship full of heart and soul.
On a whole this was an epic romance that made me cry a time or two, made me angry a time or three with how truly awful some people can be, all while watching the burgeoning romance of two bruised people who become stronger together.  There's lots of steamy moments, lots of painful moments too that we're all perfectly balanced to keep me inhaling this book.  Along with an unforgettable main couple were a cast of secondary characters, some who we've seen before and some who I hope to see more of. They're a solid support to this couple, an unconventional family of their own making, a family who all experienced painful childhoods.  From the first page to the last this book held me captive, on edge over what would happen to Charity while rooting for her to accept all the unconditional love and support Finn offered her.  Readers looking for an emotionally powerful read, gritty realism, and a love that defies the odds will definitely want to add this to their bookshelf!
My rating for this is an A.
*I got this book from the author for review in exchange for my honest opinion. 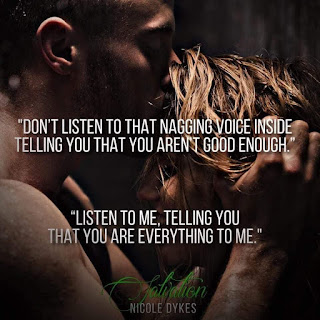 AUTHOR INFO:
Nicole Dykes is a wife and professional assistant/mom to two gorgeous girls. Currently residing in Kansas, she’s a lover of coffee, Kansas City Chiefs, and all things romance.
She currently has over 20 published books with her Monroe and Adamson series being the most popular. She enjoys cranking up the angst level, making her readers cry, and turning those tears into the coffee that fuels her writing.
FACEBOOK  |  TWITTER  |  INSTAGRAM  |  BOOKBUB  |  GOODREADS AUTHOR PAGE  |  AMAZON AUTHOR PAGE
at April 22, 2021