Day 2 of An Introduction to The Stadium Series by S.A. Clayton......

S.A. Clayton is launching her new Stadium Series soon and courtesy of InkSlingerPR we're going to reveal one cover for the series per day for the rest of this week. Today we are sharing the cover for Curve Ball, the second book in the series that will be releasing on June 14th! 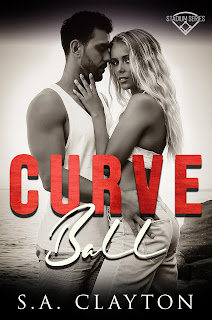 Curveball - Noun: Something which is unexpected, surprising or disruptive.
Josh Anderson always prided himself on his work ethic. He’s never met a challenge he could notice, but Harper Stevens is something he never expected to have to work for. Yet, he’ll work as hard as he can to prove to her just how much she means to him.
Harper Stevens knows Josh is unlike any man she’s ever known. She craves him more than she wants to admit, yet her past seems to hold an invisible hold on the future she craves so much.
Both will be faced with hurdles neither expected. The question is, will they be able to work through them together or will it tear them apart and shatter everything they’ve created.
FIND AT GOODREADS here.
PRE-ORDER LINKS:  AMAZON  |  BN  |  KOBO  |  iBOOKS 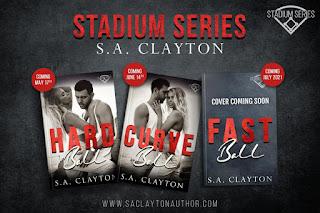 AUTHOR INFO:
S.A. Clayton lives in a small town outside of Toronto, Canada with her husband and her scary large collection of books that seem to take over every room.
She has worked on both sides of the publishing industry, both in a bookstore and for actual publishing companies. Although she loved both for different reasons, she found that writing was her true passion and has spent the last few years breaking into the industry as best she can.
She is a lover of all things romance and began her writing journey in her late twenties. Since then, she has immersed herself in the romance genre and couldn't be happier.
When she's not writing or reading, she enjoys binging a great Netflix show (Stranger Things anyone?), baking (because who doesn't love cookies!), and spending time with her family.
AMAZON AUTHOR PAGE  |  FACEBOOK PAGE  |  FACEBOOK GROUP  |  TWITTER  |  INSTAGRAM  |  BOOKBUB  |  GOODREADS AUTHOR PAGE
at April 29, 2021