Book Release Blitz for Hers to Tame by Avery Samson (REVIEW)......

Opposites attract in this charming tale of a playboy and a quiet literature teacher when he discovers that the way to her heart is through books.  Keep reading to get a tempting taste of Hers to Tame by Avery Samson, along with getting my impressions of this third installment in the Sideswiped series, which will have you wanting to add it to your bookshelf! 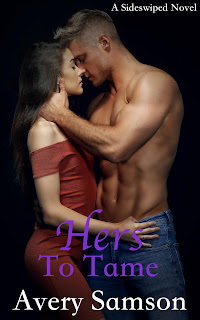 Maggie Emerson has known Colin Rhett since meeting him in her friend’s swimming pool her freshman year of college. Everyone knows the playboy with the movie star good looks. They also know he goes through women with barely a second thought. So what does she do when he appeals to the literature teacher in her? She gives him a book, of course. What about when he doesn’t stop at one? Maybe the Colin everyone thinks they know is really much deeper than anybody gives him credit for. If she looks, really looks at him, will she find the man of her dreams or that same playboy she thought he always was?
Colin is a successful attorney with a different woman every week, but what he really wants is the one woman he can’t have. All he has wanted since that fateful day in the swimming pool six years ago is to be her hero, but there was always a reason holding him back. Will this finally be his chance to prove to her that he can be the man she needs? If he has to read every damn book in the bookstore, he’s going to fight this time for that right.
BUY here.

MY IMPRESSIONS OF THIS BOOK:
Though this is the third installment in the Sideswiped series that shouldn't stop readers who haven't read this series before from picking this one up.  Delightful dialogue, steamy interactions, and a connection teeming with sexual tension fuels this story and kept me fully engaged from the first page to the last.  By the turn of the final page I was ready to dive into more books by Ms. Samson, ready to be charmed even more by her crackling banter and sweet and sexy exchanges.
At the start of this story Colin Rhett doesn't make a good first impression as I found him to be an arrogant manwhore early on, a lawyer who's a bit quick to anger.  I couldn't picture a man like him paired up with the kind and likable Maggie, but once he committed to making her his he went above and beyond to win her over in a journey of text messages, heartfelt talks, and other endearing actions that put a smile on my face.  Throughout their time together Colin slowly won me over too.  He'd been attracted to Maggie for years, but with her being younger he held off in claiming her.  Once he sees her again though, after years apart, he commits to claiming her in an endearing journey of second chances that made for a charming romance.  It's a charming connection that brought out his protective side, brought out a flirty and playful nature that just felt right.
Maggie Emerson is best friend to Lily which means seeing Lily's brother (the sexy playboy Colin) from time to time.  From the moment she first laid eyes on Colin, Maggie has always been attracted to him, even though she knew he was not the commitment type and lived far away from her which made commitment even more difficult.  She can at least admire him from afar though and does so from the moment he decides to woo her in a journey of text messages and literary flirtations. Theirs is a romance full of sexual tension with their interactions growing ever steamier amidst their verbal foreplay. Through it all Maggie was an immensely appealing heroine, a straightforward young woman who brought out the best in Colin in a journey that warmed my heart.
This was a quick read, one with witty banter and sweet and sexy interactions.  It featured two apparent opposites who made an entertaining and endearing match in a romance that was decadently delightful and that still has me smiling long after the final page was turned.
My rating for this is an A-
*I got this book from the author for review in exchange for my honest opinion. 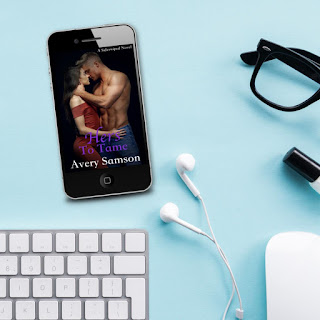 AUTHOR INFO:
Avery Samson grew up on a ranch outside of a small west Texas town. Since she could remember, she’s had her face stuck in a book. She left ranch life to attend Texas Christian University where she studied History and English receiving her Bachelor’s degree.
After living all over the state of Texas, she now finds herself back on one of the family ranches near Dallas with her husband surrounded by cattle. When not traveling or reading, she spends her time writing.
FACEBOOK  |  INSTAGRAM  |  GOODREADS AUTHOR PAGE
at April 07, 2021