Readers will be charmed by this friends to lovers romance set in the hockey world.  Keep reading to get a tempting taste of Saved by Colleen Charles, along with my impressions of it, then add this fifth installment in the Minnesota Caribou series to your bookshelf! 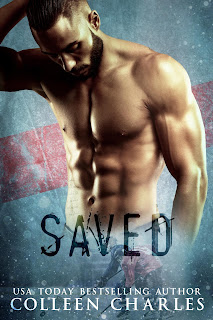 I'm in love with my best friend...
Like all sad stories, mine begins with Johnnie Walker Red, bad decisions...
And a dick pic.
During a wild night, my teammates start goofing around. Riding me about my childhood crush, Cora.
I love my sweet, smart Cora with all my heart. Since catching fireflies in a mason jar. Since holding hands behind the jungle gym. Since forever.
If I put my heart on the line, she might reject me and shatter it into a million pieces.
It would be over before it even had a chance.
But with one press of a button, her entire knitting circle sees my junk.
Even her grandma.
But they don't know it's me in that filthy picture. Whew. Crisis averted.
Until Cora figures out the truth.
Now one silly mistake just might take away my one chance with the woman who holds my heart in the palm of her hand.
BUY here. 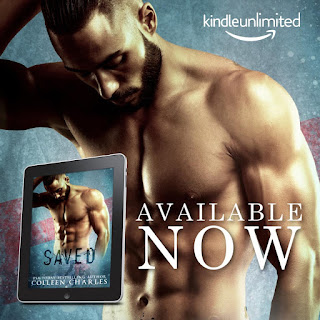 MY IMPRESSIONS OF THIS BOOK:
As a fan of friends to lovers romances I found this release an immensely satisfying story, charming and endearing as two childhood friends try to navigate becoming something more.  Theirs isn't an easy journey though as outside forces, insecurities, and a lack of maturity had them ruining things before they barely began.  Though much of their story is familiar it's still a tale that made me smile courtesy of Nana and her friends who were wise and laugh out loud funny as they played matchmaker.
From the very first page readers got a glimpse of how close Cora and Blaine are as friends since they were children.  They both have an attraction to the other but are scared to move out of the friend-zone for fear they'll ruin the connection they already have.  But when a naughty picture gets out into the world it's finally the push they've needed to move forward.  It's a rocky road to romance for them, one that will require some maturing and actual talking.  Assisting them along the way is Nana and her elderly posse of knitters whose actions made me smile and has me hoping for a Nana of my own.  Also adding their two cents are Blaine's teammates and couples from the previous books in this series.  It was a nice sense of family they brought to the story, a nice support that had me rooting for this young couple every step of the way.  Though I haven’t read the previous books in this series I’m now left tempted and ready to read this series from the beginning and recommend the same to other fans of hockey-fueled, friends to lovers romances!
My rating for this is a B.
*I got this book from the author for review in exchange for my honest opinion. 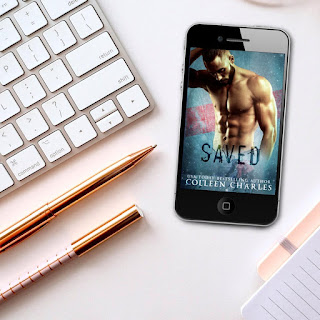 AUTHOR INFO:
Colleen Charles is the USA Today Bestselling author of Perfectly Imperfect Romance for perfectly imperfect readers.
Take a chance and join her...you won't be sorry you did.
FREE FULL-LENGTH EXCLUSIVE NOVEL for new subscribers HERE.
Colleen loves to hear from her readers, and she answers all communications personally. You can find her at:
FACEBOOK  |  TWITTER  |  EMAIL
at April 22, 2021