Book Tour for The Rebel by Kendall Ryan (REVIEW)......

An unforgettable one night stand lingers in the thoughts of a woman recently made owner of a hockey team and a man who's head of security for the team in a battle of wills that heats up things on and off the ice.  Keep reading to get a tempting taste of The Rebel by Kendall Ryan, along with my impressions of this first installment in the Looking to Score series, then add it to your bookshelf! 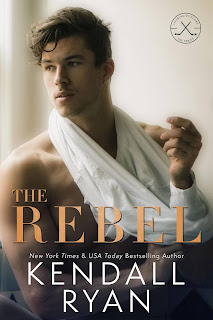 Eden’s entire life changed in an instant. After enduring a messy breakup and the death of her grandfather, she’s the new owner of his business, a struggling hockey franchise.
Bad things happen in threes, right?
Not one to back down from a challenge, she jumps in with both stilettos. There’s just one tempting and sinfully handsome problem...her new head of security, Holt Rossi.
Eden and Holt share a complicated history, one steamy night in college that she’s never forgotten. The man is about as mild-mannered as a pack of wolves, and now he’s back in her life, crowding her space, edging out all her good sense. And Holt hasn’t changed a bit. The emotionally damaged, sexy-as-hell beast of a man has her tied up in knots yet again.
But temptation proves to be too much for either of them to handle. Holt, for one, is willing to overlook the rules or even slam right through them, if it means he can have Eden again.
Between her ex—a bad-boy hockey player—and her distractingly handsome head of security, Eden is in for a bumpy ride.
Warning: This romance contains one growly, broken hero; a bunch of rowdy hockey players; and a smart, hardworking heroine whose life hasn’t been all sunshine.
FIND AT GOODREADS here.
BUY LINKS:  AMAZON (US)  |  AMAZON (INT)  |  iBOOKS |  BN  |  KOBO

MY IMPRESSIONS OF THIS BOOK:
I'm a sucker for second chance romances and was captivated from the very start by Ms. Ryan's series starter of a forbidden connection between a woman trying to prove herself and the man who's never forgotten her since their one night stand years ago.  From their crackling reunion to their day-to-day sexual tension theirs is a connection that both warmed my heart while making me blush a time or two in a story that was solid, sweet, and sexy.  It wasn't anything groundbreaking, but it was satisfying and has me looking forward to the next book in this series.
To the outside world Eden Wynn seems to have it all as a Boston heiress from a family of wealth and fame.  Behind the facade though her life has veered dramatically off course due to a public break-up and the death of her grandfather who left her the new owner of the Titans hockey team.  Being a woman in a predominantly male world means she has a lot to prove, not only to the players and fans, but to herself too.  Her break-up left her feeling lacking, bruised her self-esteem, but the appearance of an unforgettable one night stand is just the healing balm she needs.  Her attraction to her new head of security may be seen as forbidden but it's clear that these two are meant to be together in their slow-burn second chance at HEA.  Eden's a likable heroine, one who's clearly matured since she and Holt first got together, and I feel as though she's now worthy of him.
Holt Rossi is also going through some life changes courtesy of his security firm's new contract with the Titans hockey team which will put his company on the map.  It also leads to unforeseen complications once he discovers that his job will require him to guard his former college crush, Eden.  He's never forgotten Eden from their time together, she's a regret he's never gotten over and he's determined to keep her this time around.  Holt's a delicious hero, sweet and sexy, a gentle giant with a heart of gold who's never felt worthy of Eden.  He's older and wiser now though and it warmed my heart to see how united these two are once they see each other again.  Despite what happened in the past I was immediately invested in this couple and was rooting for them every step of the way.
Eden and Holt's past was seamlessly incorporated into this story from page one and I became captivated by their second chance at HEA.  I enjoyed the slow-burn between them and the straightforward moments of dealing with their emotions which created just enough angst to make their romance satisfying.  It was them against the world and each was made stronger through the support of the other. I also enjoyed the balance of hockey and romance which let Eden show a soft side, as well as a barracuda side, that made her an immensely appealing heroine.  Holt was a swoon-worthy hero who was a highlight of the story for me, a hero who I'm still picturing in my dreams.  Along with this likable main couple were the members of the Titans hockey team, a group of decadently delightful players who I'm longing to see more of.  And with the enticing introduction of whose story is next (that readers saw at the end of this book) I'm especially looking forward to what's going to happen next!  Overall fans of hockey-fueled romances with find this a satisfying addition to the genre, one that's familiar and comfortable, and will be counting down the days until the next installment in the Looking to Score series hits bookshelves.
My rating for this is a B+
*I got this book from the author for review in exchange for my honest opinion. 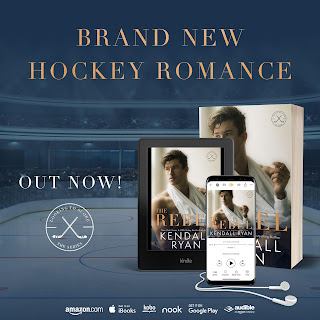 AUTHOR INFO:
A New York Times, Wall Street Journal, and USA Today bestselling author of more than three dozen titles, Kendall Ryan has sold over 3 million books and her books have been translated into several languages in countries around the world.
Her books have also appeared on the New York Times and USA Today bestseller lists more than 100 times. Ryan has been featured in such publications as USA Today, Newsweek, and InTouch Magazine.
She lives in Texas with her husband and two sons.
WEBSITE  |  FACEBOOK  |  INSTAGRAM  |  NEWSLETTER  |  TWITTER  |  PINTEREST  |  GOODREADS AUTHOR PAGE  |  AMAZON AUTHOR PAGE |  BOOKBUB AUTHOR PAGE
at April 01, 2021