Readers will find this a scorching and suspenseful read as three people try to make a connection in a world that wants to keep them apart.  Keep reading to get a tempting taste of Mad Dog by Ophelia Bell, then be sure to add this gritty and erotically-charged ménage to your bookshelf.  In honor of this first installment in the Second Skin series make sure to fill out the form below for the chance to win a signed print copy of this book, a removable tattoo, along with an e-copy of the next book in this series too! 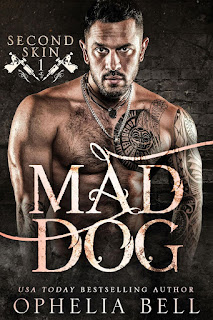 Not even the king of Los Angeles’s underground can stop me from loving Celeste.
Arturo Flores could make me disappear with a snap of his fingers, and nearly did. Limping away from a beatdown when I was seventeen didn’t change the fact that his daughter was worth the pain. Running into her in my tattoo shop twelve years later, she still makes my blood run hot with a glance.
But I’m not that clueless teenage boy anymore. And Celeste isn’t the only one I want.
Leo is a temptation I crave, but in our world, admitting desires like mine could get me killed. The gangbanger is as ruthless as he is beautiful, yet he can’t see anything beyond Celeste. That hurts like hell to admit, but I would sooner die at her crime lord father’s hands than let either of them get hurt.
I’m prepared to let them have each other when Leo comes to me with an offer. One that could connect the three of us in a way that flies in the face of the world we live in. His proposal ignites a fire in my veins. If it fails, we’ll all get burned, but for a man with nothing to lose, I’m just desperate enough to take that chance.
EXCERPT:
Deep down, I know there are too many decisions I’ll have to make very soon, but right now, I’m content to just do what he wants. He gets my other boot off, followed by my thin socks, and tosses them in the corner of the shower. Then he stands and works on the buttons of my blouse. I stand numb and silent, arms hanging at my sides as he peels the shirt off me. It lands in a sodden heap on top of my boots. He tugs at the button of my jeans.
The tickle of the zipper over my pelvis wakes me up to a new awareness. It’s the opposite of safe but just as certain an escape. The hot water pounds against my back as his strong fingers tug and peel my jeans down my legs. His short hair glistens with moisture, and his faded black T-shirt is soaked through, adhering to his muscled shoulders and back.
I stare at his left arm as it flexes. The water flowing off it accents the inconsistent texture beneath the ink that hides his scars like a second skin. The scars extend all the way to his shoulder, the dusky point of one jutting out of his collar at his neck like some foreign creature has taken up residence beneath his skin and is slowly spreading, infecting him from the inside out. Something about it makes me feel a kinship to him I never did before, a bone-deep understanding of what it is to feel the need to hide our deepest, most damaged pieces.
FIND AT GOODREADS here. 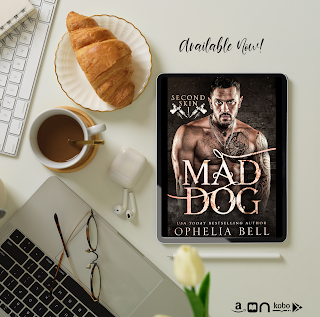 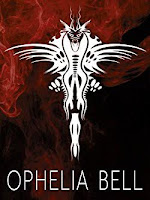 AUTHOR INFO:
Ophelia Bell loves a good bad-boy and especially strong women in her stories. Women who aren't apologetic about enjoying sex and bad boys who don't mind being with a woman who's in charge, at least on the surface, because pretty much anything goes in the bedroom.
Ophelia grew up on a rural farm in North Carolina and now lives in Los Angeles with her own tattooed bad-boy husband and four attention-whoring cats.
If you'd like to receive regular updates on Ophelia's publications, freebies, and discounts, please subscribe to her mailing list HERE.
GOODREADS AUTHOR PAGE  |  INSTAGRAM  |  FACEBOOK  |  TWITTER  |  WEBSITE
*********GIVEAWAY**********
a Rafflecopter giveaway
at April 20, 2021