Book Tour for The Most Eligible Viscount in London by Ella Quinn (GIVEAWAY)....

Readers will be charmed by this Regency-fueled tale of a young man's awkward proposal, and the friends and family who try to help him get it right, to win the woman he longs for.  Keep reading to get a tempting taste of The Most Eligible Viscount in London by Ella Quinn, then learn even more about this book by visiting the other sites hosting this tour.  In honor of this second installment in The Lords of London series make sure to fill out the form below for the chance to win a $25 Amazon/iTunes GC too! 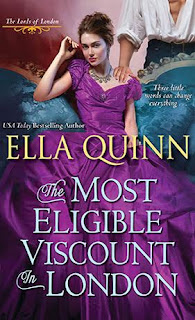 In bestselling author Ella Quinn’s intriguing new Regency trilogy, a dashing suitor must decide if love and marriage are mutually exclusive...
Viscount Gavin Turley is convinced that love matches cause nothing but trouble. Still, after months of courting, he’s fallen for Miss Georgie Featherton. He’s passionate about her, in fact. But words of love are not an indulgence he will allow himself. When he presents Georgie with his marriage proposal, he will lead with his head—not his heart. His qualifications as a husband are excellent, after all. What could go wrong?
No sooner does Gavin kneel on one knee than Georgie’s heart goes aflutter with joy. Finally, the proposal she longed for had arrived. Yet Gavin seemed to be listing his credentials for a business partnership, not a romantic union. Without a declaration of love, Georgie can only reject his offer—unless the ladies of the ton, and Georgie’s grandmamma, have anything to do with it. For sometimes it takes a wiser eye to see the love behind a guarded heart—and a clever scheme to bring it out of hiding...
EXCERPT:
A light tap sounded on the door to Georgie’s parlor. Smith opened it and stood aside as Adeline swept into the room.
“I did not think you would be resting.” She sounded pleased to have been right. “How are you doing?”
Georgie shrugged. “I wish I knew.”
“I can tell you that he does want very much to marry you.” Georgie pulled a face. “Yet he is still haunted by his father.”
In an attempt to help, Littleton had told Adeline who in turn told Georgie about the mess the former Lord Turley had made of everything after his wife had died. “I understand why he thinks he should not love his wife, but I do not understand how one can stop oneself from falling in love.” And that was the essence of the matter. Georgie firmly believed that love was the thing that held two people together during difficult times. She began pacing the room again, changing directions so as not to wear a path in the rug. “Do I give him another chance? Or would I be wasting my time? If he is so certain he will not love his wife, I do not see what I can do to change his mind.”
Adeline’s forehead creased in thought. “Allowing him until the end of the month to convince you would still give you time to go back to Town before the Season ends, and it would answer your questions.”
“I suppose you are correct.” Georgie stopped pacing. Why was this so hard? She closed her eyes and reached deep into her heart. There was a chance that there might be another gentleman out there who was even more perfect for her than Lord Turley only because this unknown gentleman loved her. But until she knew for certain that Turley would never love her, she would give him an opportunity to prove himself. “I shall give him one more chance.”
“I need to tell you one more bit of information.” This time her friend had a wicked grin on her face. “Your grandmother and her friend the duchess arrive tomorrow. They are staying with Mama-in-law.”
“And Turley.” Georgie felt her eyes widen. “Oh my. That will be interesting. What I would not give to hear what they have to say to him.”
“That is exactly what I thought,” her friend agreed. “Frits has suggested that he be allowed to come here as often as he wishes in order to court you. Do you have any objections?”
Georgie began pacing again. For some reason, she could not remain still. Littlewood really was the perfect place for a courtship. Other than the house party entertainments, they could spend time out of the eyes of the ton. It would give her—them—both the opportunity to attempt to resolve the differences in what they each wanted in a marriage. “No.” She wondered what role her grandmother and the duchess would play. “No. I have no objections.” Having a course of action would, at the very least, help her shake off the malaise she had been experiencing. “In fact, I believe I am looking forward to seeing how he intends to convince me I should enter into a loveless marriage.” 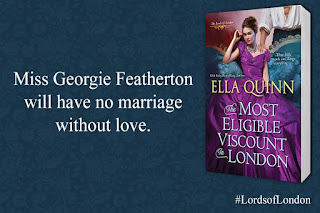 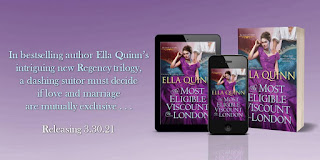 AUTHOR INFO:
USA Today bestselling author Ella Quinn's studies and other jobs have always been on the serious side. Reading historical romances, especially Regencies, was her escape. Eventually her love of historical novels led her to start writing them.
She is married to her wonderful husband of over thirty years. They have a son and two beautiful granddaughters, and a Great Dane. After living in the South Pacific, Central America, North Africa, England and Europe, she and her husband decided to make their dreams come true and are now living on a sailboat. After cruising the Caribbean and North America, she completed a transatlantic crossing from St. Martin to Southern Europe. She's currently living in Germany, happily writing while her husband is back at work, recovering from retirement.
Ella loves when readers connect with her.
WEBSITE  |  FACEBOOK  |  TWITTER  |  GOODREADS AUTHOR PAGE  |  BOOKBUB  |  AMAZON AUTHOR PAGE
**********GIVEAWAY**********
a Rafflecopter giveaway
at April 27, 2021