Set in the world of the Save Me series comes this emotionally intense romance between a rockstar and a wounded warrior who doesn't know where his place in the world is...but maybe his heart will answer that question for him.  Keep reading to get a tempting taste of Guarding Shadows by Aly Stiles & Hazel James, along with my impressions of this fifth addition to the series, which will have you wanting to add it to your bookshelf! 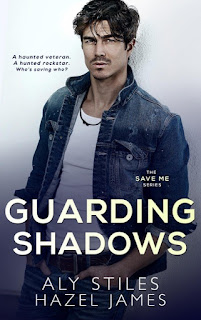 An emotional rockstar and military romance that can be read as a standalone.
Her demon stalks her.
His demons haunt the shadows of his head.
Internet star turned rocker Quinn Wylder never asked to be famous. So when she starts receiving disturbing messages while on tour with her new band, her reluctant dream quickly becomes a nightmare.
Army veteran Tanner Clarke never asked to be medically retired. But when an injury and PTSD diagnosis force him out of service, he’s left lost and alone in a civilian world that doesn’t seem to have a place for him.
It was the perfect solution: the compassionate angel who needs security hiring the haunted warrior trained to protect. But the biggest battle they face may be one they never saw coming—guarding a body is nothing compared to protecting a heart. 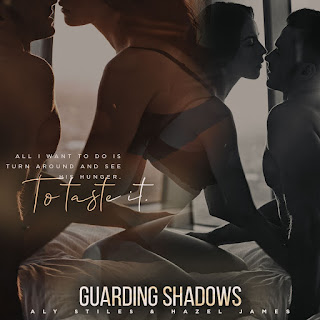 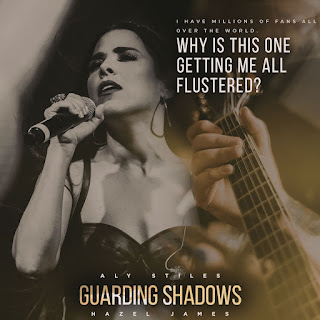 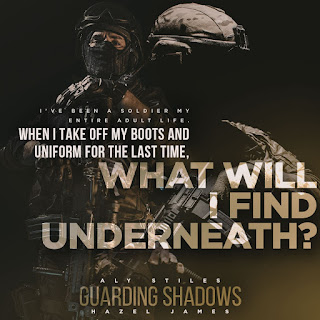 MY IMPRESSIONS OF THIS BOOK:
From the moment I picked up this book I was immediately swept up in an emotionally intense tale depicting the painful process of soldiers returning home, their lack of support and their feelings of being lost and alone in a country that forgets about them once their uniforms come off.  Add in a sassy and strong-willed songstress in need of protection and you end up with a suspenseful tale of opposites attracting, a tale full of heart and soul.
Tanner Clarke served his country with honor and dignity, put his life on the line for love of country, but his return home after being medically discharged has been anything but rewarding.  Having no support from his family, and having PTSD, has left him feeling isolated without a job and on the verge of being homeless.  I ached for Tanner and where he is at the start of this story as he's dejected and feeling at the end of his rope with nowhere to turn.  It's at this darkest moment that an angel comes into his life in the form of singer Quinn Wylder, a woman he met when he was in the military and who now offers him a home and a job.  It's a connection that changes both of their lives irrevocably, a connection that also pulled at my heartstrings in a tale of healing and support.  With a story that was realistically depicted, and sometimes hard to read, readers get to see that the return to civilian life isn't easy and without support it becomes heartbreaking.  Tanner's family is awful, never listening to him and blaming him for his PTSD.  There were times I wanted to smack them in fact, as his pain radiated off him in waves, and as he expressed some very dark thoughts at the start of the story. The lack of support from those who should've been the most supportive made me appreciate Quinn all the more.  She quickly became the lone light in his dark world, gave him unconditional support as he again put his life on the line for another to keep her safe from a stalker.  Tanner's a delicious hero, despite all his baggage.  At his core he's a caretaker, a man of honor who wears the creed of to protect and serve like a second skin.  He's a bit dark and gloomy, but when you're in need of protection, he's just what you need.  He's been drawn to Quinn since he last met her, but doesn't feel comfortable mixing business and pleasure since becoming her bodyguard.  You can't stop fate though and it's not long before their slow-burn romance gains strength.  Through heartfelt talks and their unwavering belief in each other, their connection grew as it warmed my heart.
Quinn Wylder is a wonderful heroine, one full of light with a kind heart, and she's just what Tanner's been missing since he returned home in a tale of opposites attracting. She loves music but hates being in the spotlight, especially with stalkers now crawling out of the woodwork as her band gains more notoriety.  Through their time together she gives Tanner the support that's been missing from his life and in turn he helps her believe more strongly in herself as her band gets more famous.  She also gives him moments of laughter that diminish the darkness in this empowering romance of starting over.
This is a powerful read, a gritty one too with flashes of much-appreciated humor, that pulled at my heartstrings from the first page to the last.  Tanner and Quinn are a wonderful couple whose slow-burn romance kept me glued to the pages in a tale of opposites attracting that had me rooting for these two every step of the way.  Their romance was immensely satisfying too as sweet and sensual moments were nicely balanced with the suspense of Quinn's stalker.  Quinn's bandmates were a nice addition too, providing a few moments of laughter along the way, and I'd love to see more of them in the future.  Once I turned the final page I felt happy seeing two people clearly meant to be find each other in a tale of unconditional support and healing and I definitely recommend it to readers looking for an epic love story!
My rating for this is an A.
*I got this book from the author for review in exchange for my honest opinion. 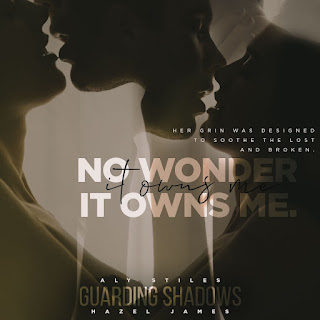