In a colorful and action-fueled romance of opposites attracting comes a young woman, a youngster who learned about life through years of living in an orphanage, and a battle-scarred warrior who insists they're mates on a hunt to save her adopted brother.  Keep reading to get a tempting taste of Stealing Jia by Gail Koger, along with learning even more about this book by visiting the other sites hosting this tour, then add it to your bookshelf.  In honor of this thirteenth installment in the Coletti Warlord series make sure to fill out the form below for the chance to win a $20 bookstore GC too! 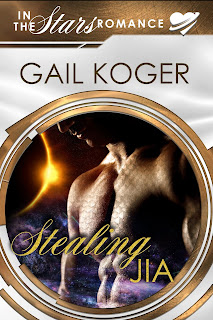 Jia grew up in an orphanage that turned children into master thieves and gave the school of hard knocks a run for its money. Jia’s psychic talents have kept her alive, but not out of trouble. While searching for her adopted brother, Jia finds herself on a galactic adventure with a horde of mischievous extra-terrestrial kids she’s determined to protect. Adding to the chaos is an Askole Battle Commander who claims she is his mate. How is that even possible? They’ve never met.
Trayon, the Battle Commander, is a deadly Askole. Huge. Battle hardened muscles. A regular warrior’s nightmare with black, armor-plated skin and tentacles. Who knew the scary guy was such an excellent kisser and had the heart of a romantic? All Jia ever wanted was a family of her own. Maybe an alien family wouldn’t be so bad.
To win Jia, Trayon must prove he loves her and she’s not some female the Coletti Overlord just sold him. But first, he has to keep the trouble magnet alive long enough to convince her.
EXCERPT:
“Why are there blood worms webbed to the walls and ceiling?"
The shock in Trayon’s voice would have been amusing in any other circumstance. I cracked open an eye.
“Whatever you do, don’t go in the bathroom."
“Why not?"
“Bath time got a little messy.” One look and he’d probably rescind the mating contract.
Trayon’s boots made an icky squishing noise as he walked across the room. I could feel his horror when he exclaimed, “A little messy?"
“I told you not to go in there."
“I have seen battle scenes with less blood,” Trayon groused.
“Did you know baby Tabors are taught how to program food replicators?” “I was not aware of that fact."
“I want to have a talk with whoever came up with that bright idea. The evil twins decided they wanted to sample blood worms while I was introducing the concept of a shower to Cason. Who, by the way, hates water. A lot."
“And?"
“LeeLee and LooLoo agreed blood worms taste nasty. I caught them doing a wonderful impression of Tarzan on crack as they webbed twelve dozen blood worms to every surface they could find."
“Who is this Tarzan?"
“A story for another time. The point is Adoz and Pepe joined in the fun too." I gestured around the room. “And wa-lah! Mass destruction.”

AUTHOR INFO:
I was a 9-1-1 dispatcher for the Glendale Police Department and to keep from going totally bonkers – I mean people have no idea of what a real emergency is. Take this for an example: I answered, “9-1-1 emergency, what’s your emergency?” And this hysterical woman yelled, “My bird is in a tree.” Sometimes I really couldn’t help myself, so I said, “Birds have a tendency to do that, ma’am.” The woman screeched, “No! You don’t understand. My pet parakeet is in the tree. I’ve just got to get him down.” Like I said, not a clue. “I’m sorry ma’am, but we don’t get birds out of trees.” The woman then cried, “But... What about my husband? He’s up there, too.” See what I had to deal with? To keep from hitting myself repeatedly in the head with my phone, I took up writing.
GOODREADS AUTHOR PAGE  |  FACEBOOK  |  TWITTER  |  AMAZON AUTHOR PAGE  |  WEBSITE
**********GIVEAWAY**********
a Rafflecopter giveaway
at December 31, 2020