Review for Doubtless by Cat Grant 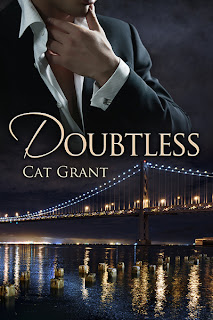 Loving another begins with loving yourself.

On the surface, Steve Campbell seems to have it all: a beautiful home, a snazzy car, and a dream job as one of the country’s top 3-D optics researchers. But underneath, he’s restless and dissatisfied, tired of empty encounters with leggy lab assistants and endless evenings alone.

A chance meeting with a handsome escort lifts Steve’s spirits and opens his eyes to his long-repressed attraction to men—and his love for his best friend and business partner, Connor Morrison.

Connor might’ve loved Steve like that once, but now it’s too late for their happily ever after; Connor’s about to ask his boyfriend to marry him. Fortunately, it's never too late to learn about yourself, and maybe Steve can find a happy ending on his own.

Doubtless is a sequel to Ms. Grant's previous short story Priceless and reintroduces us to the characters of that story and gives us an update as to how the main couple is fairing.  I enjoyed that part of the story as it was like reminiscing with old friends and finding out that HEA does last beyond the final page.  In Doubtless, HEA takes on a whole new meaning in this unique view of one man being set on the road to happiness where the ending is just the beginning.

Steve Campbell has always considered himself a sexy player, but as he gets older it's harder to compete in the arena of sex.  One night he reaches an all-time low and that's when he meets the man to completely turn his life around.  At first, he thinks Dylan is just a well dressed guy who he enjoys spending time talking to.  But he soon realizes that Dylan is an escort after inviting him out to dinner as friends.  Their relationship soon morphs into something more complicated, yet satisfying.  Dylan is a suave character comfortable in his choice of short-term occupation but is still a mystery at the end of the story.  There's flashes of him wanting more with Steve and I truly believe we haven't seen the last of him (which would make me very happy).

Steve doesn't want to acknowledge he's gay, but with the connection he's always felt for his friend Connor combined with the comfort he feels when he's around Dylan, leads him to ultimately acknowledge the truth about himself.  Because of Dylan, in a reverse of the usual Pretty Woman scenario, Steve now dresses in an enhancing way and has more self-esteem and a better understanding of who he is.  He matured during this story and now has the tools and confidence to go after happiness and I look forward to him finding his special someone (if he hasn't already) in a future book.

This is not your typical romance story.  But considering how satisfying a read it was, that's not a bad thing.  There's romantic elements permeating the story and some very satisfying sexual tension.  Even though the conclusion is open-ended there's a sense of hopefulness and that truly is a happy ending.  Those looking for the unexpected will find it in this book.

*I received this book from the author in exchange for my honest opinion.
at July 17, 2012