Review for Giving It Up by Amber Lin 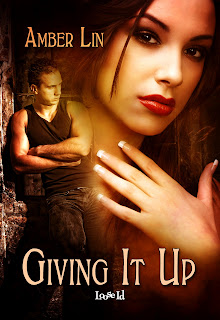 Allie prowls the club for a man who will use her hard and then ditch her. Hey, it's not rape if she wants it. Instead she finds Colin, who looks tough but treats her tenderly, despite her protests.

He tempts her, but kindness and a few mindblowing orgasms aren't enough to put her back together again. Allie has no hope for a real relationship. Two years ago her best friend betrayed her in the worst possible way – she’d be stupid to trust a man again. Besides, she has her daughter to think of, the only good thing to have come from that dark night.

But when her rapist returns, threatening her sanity and custody of her daughter, Allie turns to Colin. Under his protection and patient touch, Allie begins to heal and learns to hope. Colin’s no saint, though, and his criminal past draws danger of its own. Allie must fight to protect her child and the man she loves, hoping her newfound power will be enough to save them all.

Looking for a sexy read full of emotional upheaval, unforgettable characters, and unexpected truths, then Giving It Up fits the bill to a tee.  It's a tough book to read as the events that befell Allie are truly horrible and have left her punishing herself and trusting virtually no one.  There were times I admired her as I simultaneously became exasperated by her.  With all the trauma she experienced early in life I can understand some of her baggage.  But as she gains a better understanding of her inner psyche I wish she would've made those who hurt her held accountable.  She took some emotional steps forward but by not being stronger and telling her story out loud, she took some steps back.  These actions didn't ring true to me and were a constant source of irritation to me.

Colin too has a lot of emotional baggage stemming from a difficult childhood.  To him, buying affection is the only way someone will love you.  It leads him to be overbearing towards Allie and forcing her into making decisions she might not have normally made, even if those choices are ultimately for the best.  He was a knight in shining armor, albeit a bit tarnished.  I felt sympathetic towards him as his brother seems to have a complicated hold over him that makes his relationship with Allie even rockier.  Those moments where he stood up to Phillip made me cheer.

Along with the emotionally complicated main characters comes a cast of equally intriguing secondary characters.  Oldest brother Phillip has a very dark side that showed flashes of heart amidst his cruelty.  I definitely want to see more of him and if he can ever find a bit of brightness to lighten his darkness.  Allie's friend Shelly, the hooker with a heart of gold, puts her very life on the line for Allie and deserves some happiness.  We're left with a glimmer of hope for her courtesy of an unexpected person.  These two characters could easily sustain their own stories and deserve to be in the spotlight with their larger than life personas.

This was a tough book to read, very gritty and not pretty at times.  The sexual interludes are not always romantic, but always intense.  Guilt and lack of trust haunt all of these characters dragging them down so whenever there's a bit of brightness you embrace it.  It's a thought provoking book and one whose realism draws you in with characters and actions that stay with you long after the book ends.  But make sure to have tissues near by for those moments of tears and anger.

*I received this book from the author in exchange for my honest opinion.
at July 16, 2012