Review for Druid, Mine by Kerry Adrienne 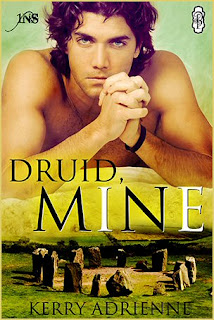 Anya’s wish for a normal date—away from the old man she is caretaker for—comes true in unexpected ways when she finds herself whisked to an ancient Irish stone circle on solstice eve.

Carrick’s decision to follow the path to become an Ovate druid has not come lightly, and he plans to spend the solstice eve in meditation unless fairies or evil spirits disrupt the circle. When a feisty girl walks right up to the fire, more than sparks fly.

They each seek healing and a connection, but the darkness of summer is short, and once the solstice sun breaks through the circle at dawn, the magic of the night will be over. Even Madame Eve can’t stop the day from rising.

Like the other books in Decadent Publishing's 1Night Stand series this one provides a pleasant interlude with likable characters and sensually satisfying interludes.  Druid, Mine is a pleasant treat that gives a few hours of enjoyment while being whisked away from all your troubles.

Anya's a likable woman who's letting life pass her by until she makes the decision to have Madame Eve find her the perfect man.  Anya's lonely and is willing to do whatever it takes to find her match.  To find the perfect man requires a visit back in time, which only throws her off for a minute or two.  She's easily accepting of it all.  Carrick too is at a crossroads as to his future.  He wants to have an important place in their society and is willing to become celibate for it.  He's lonely though too and not sure he wants to give up true love.  He's extremely sexy and extremely caring, everything a woman could want.  They quickly make a sexual connection but I never felt a strong mental/personal connection.  I was happy they got together, but I didn't find their coming together to be that satisfying.  It felt like there was something missing.

Druid, Mine was a pleasant dessert after a long day.  I found much to recommend it, but ultimately didn't feel it was as satisfying as other books in the series.  I definitely will read more from Kerry Adrienne as her last two 1Night Stand series releases were full of promise.

*I received this book from the author in exchange for my honest opinion.
at July 24, 2012