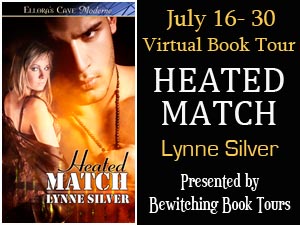 Military hero takes on a whole new meaning in this story of genetic enhancement and the reporter who falls for him.  Lynne Silver is here today talking about the cover to her new release and giving us a glimpse of her new Release.  So keep reading to learn more about Lynne and Heated Match....

I received the cover for Heated Match, and sighed with delight. The hero was hot, the girl was how I pictured Loren, and the font told of a slight military tale.

But then I looked closer. My hero is wearing is wearing a wooden beaded necklace. Being the innocent that I am, I assumed they were kind of hippy beads. I shrugged it off. Adam, the hero is about as far from a hippy as George Bush, but maybe he has a crunchy side he didn’t reveal to me the author. Who knew?

But then I was on a plane the other day, and a woman was clutching a wooden necklace, just like my cover model’s. And I realized, they’re rosary beads! So take a good look. Is my cover model wearing rosary beads? Maybe. There’s no cross, just the beads showing on the cover.

It’d be odd for me to write a character wearing rosary beads, because I’m so Jewish , I’m not 100% sure what they are. So help me out: Name Adam’s necklace: Are they rosary beads? Or, let’s get creative! Did Loren take him to a beading class? A concert? Costa Rica?

Throw your ideas at me. I want to know. What is my hero wearing? And if they are rosary beads, why? I have a few ideas… 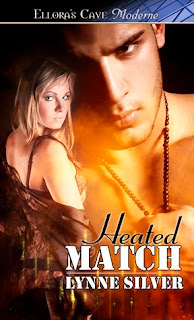 A lead byline and a cover story were what journalist Loren Stanton wanted most. Until she meets genetically enhanced soldier, Adam Blacker. Team leader of a top-secret covert ops group, Adam never wanted to search for his genetic match, but whenever he gets close to Loren, things turn hot quickly, making him forget every reason he had for retaining his bachelor status.

After a scorching night together, neither is in any doubt they are connected at the DNA-deep level, although both fear the high stakes of what it means to be together. Loren gives Adam two weeks to prove he is bred for more than war. He must show he is coded for love.

Slowly he turned back to face her and her stomach clenched with a thrill of fear and desire. Last night’s civilized dancer in a tuxedo was completely gone. In his place stood a snarling, angry, completely aroused soldier.

She used the balls of her feet to scoot farther against the wall and measured the distance between her current location and the bathroom door. Her calculations proved unnecessary.

With an untranslatable growl, Adam flung himself into the bathroom, slamming the door behind him.

She waited a minute then tapped on the door. “Um, Adam? Are you okay?”

“The damn door doesn’t lock. Back. Away.”

Alrighty then. With him behind a closed door, the aching in her lower belly subsided a degree. “Adam, will you tell me what’s going on?” She bit her lip and fondled a stiff nipple through her blouse before registering where her hands were. Adam needed to answer her questions, like right now, because she had no idea why she was locked in this small conference room with an angry, sexy man. “Adam, please.”

“You work for a newspaper. Don’t you read it?”

“Well, sure, but that doesn’t explain why we’re locked in here together.”

“Think, Loren. What did the articles say about how the Program gains new members?”

She racked her brain trying to remember. “Um, through birthing a new generation, right? But…”

The door opened a crack and she could see his anguished expression peeking through.

“Use your brain. Do I have to explain the birds and the bees? You’re no virgin, are you?”

“I know how babies are made, Adam,” she said. “But the article said you only breed with women who are your perfect genetic match…oh…” Shep’s words came back in a flash. “They think I’m your genetic match?”

He gave a curt nod and started to close the door again. She shoved her foot in to stop him. “How did they figure that out so quickly?”

“The cheek swab at the entry. I’m such an idiot. I should’ve guessed last night.”

She pushed the door open to see him better and sat back on her heels on the threshold between rooms. “How could you have guessed? It’s not like I had my DNA code printed on my dress. How does it work, exactly?” Loren asked.

“Not sure of all the scientific details, but I guess the best way to describe it is like a numbers game. The doctors know there are certain genetic combinations that will produce certain qualities. The Program has a list of their top desired traits.”

“And how do they usually find a matching female? I assume most are not so accommodating as to show up at the front door like I did.”

Adam turned at the sharp bite in her voice. “You’d be surprised,” he muttered.

“Do they kidnap women off the streets and check their blood?” she asked. “Or wait, let me guess, the Red Cross is actually a sham organization front for you to use as a recruiting pool.”

He shifted at her guess, telling her she was somewhat accurate.

“The Red Cross is an excellent organization doing important work,” he said. “But, on occasion, we will pull samples from them or other research sites to scan for appropriate genetic matches.”

“And then what? You kidnap them? Oh wait, you do that for fun, like you did me.” She folded her arms across her chest and stared at him, daring him to answer.

“No. We invite potential candidates in for a job interview. Doctor, administrative assistant, teacher for the day care, accountant, you name it.”

“And do you lock them all in a room with their potential match?”

He flung her an exasperated look. “I don’t know all the details. It’s not my department. I do know you should not have drunk the water. I can’t believe you drank the fucking water. You’re feeling the effects right now, aren’t you? Worse than last night.”

“What are you talking about? Why wouldn’t I drink the water? And what should I be feeling?” she asked nervously, but she had a very good inkling as to what he referred.

“The ache. You were a homing beacon for me last night. I could barely let you go.”

“I managed to leave,” she said.

He looked genuinely curious, but she couldn’t help noticing his hand was directly over the formidable bulge in his pants, massaging roughly. “You frightened me. I’d never felt that way with a man before, even…even in bed with my last boyfriend.” She swallowed over the lump in her throat her confession had formed.

“What about your current boyfriend? Does he heat you up?”

A flicker of a smile passed his lips so quickly she wasn’t sure it had really happened.

“What about now? Are you feeling it now?” he asked.

She felt a blush creep from the top of her breasts up to the roots of her hair, and she couldn’t look him in the eye as she nodded. “My nipples are starting to hurt. Did drinking the water do that?”

He didn’t seem embarrassed at all as he accepted her confession matter-of-factly. “It’s one of the symptoms on the Rovinsky scale. The water is laced with a drug that makes you more receptive to your match. It’s going to make you crazed for the next twenty-four hours, and I’m going to respond. If I weren’t your match, you wouldn’t feel as aroused. It’s how they test the science behind the blood work.”

“What?” Twenty-four hours of feeling like this, and she was starting to worry this was just the beginning. Her arousal was increasing every second.

“Rovinsky, our founder, came up with a list of what happens when two genetic matches meet. I don’t have it memorized, but I remember painful nipples for the female is on there.”

“A matched couple will be able to find each other, even in a crowded space, up to several thousand feet.”

“What you’re saying is you could drop us at either end of Disney and we’d find each other, even without cell phones?”

He nodded. “Right at the Haunted Mansion, but don’t say ‘us’. We,” he waggled a finger in the space between them, “are not a match. I can’t be matched.”

“My reasons are my own. I won’t let Shep manipulate me like this.”

She was shocked at the hurt his rejection caused, like a bowling ball hurled at her heart. She shouldn’t be sad. She didn’t want to be a breeding partner either. She had a life to get back to.

“What are the other symptoms?” Maybe if he listed more of them, they would discover they were not a perfect match after all.

He ticked them off on his fingers. “I’ve already said homing beacon for both partners and painful nipples for the female. Your body is getting ready for pregnancy.”

She glanced down, stunned. She could almost feel her womb rippling to life. “What else?” she asked in a whisper.

“Male arousal.” He looked almost shamefaced as he gestured to the erection fighting free of his pants.

She stared a shade longer than was acceptable, nearly having to sit on her hands to stop from stroking the alluring bulge.

“Don’t do that,” he said in a strained voice.

“Don’t look at me like you want a piece. I’m holding on to my control by a thread. If you make a move, I’ll take you.” 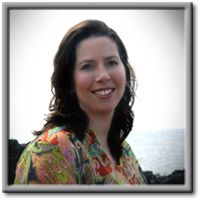 Award-winning author Lynne Silver lives the life of a suburban soccer mom, volunteering with the PTA, doing laundry and working. By night she enters the sensuous world of alpha males and passionate heroines. She lives in an old fixer-upper with her husband and their two sons. When not writing romance, she reads it. Lots of it. Over and over and over again, preferably with a bag of M&Ms in hand