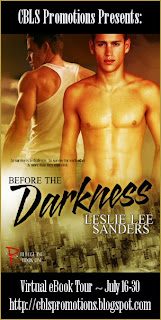 Have you ever ran across a book whose synopsis drags you in and stays with you long after reading it.  Before the Darkness by Leslie Lee Sanders is just such a book and today you get to learn for yourself just how intriguing it is.  Leslie is also here today talking about author etiquette as well as letting me give away a copy of the book.  So keep reading to learn more about this fascinating book, but first up is Leslie........

1.    Expect them to tell you every detail of their current WIP

Writers are called writers because they write their stories down for you to read them. Otherwise it would be pointless to write if we told you what we were working on. I don't mean the premise or a brief overview.  I mean details, surprises, twists, and the all-important ending of the story. Once we tell people the story, we lose passion to write it, and it may never be written. And we'll all be known as storytellers which COULD be the equivalent of the annoying coworker who always follows you around the office telling you about the amazing dream he's had the night before.

Generous authors offer free books to those as gifts, as a celebration of their hard earned accomplishment, as a way to say, "Yes! I've done it! Now come celebrate with me." We would like to see you read the book but we know that not everyone is fond of reading or dislikes certain genres or story themes. Placing it on the fireplace mantel is the next best thing. *shrugs* BUT don't just expect us to hand out copies left and right. Some of us wish to make a living off of the sale of our books. Some of us look forward to investing the money we make from sales on our most important project … the book. And some of us would like a little compensation for all the difficult work that went into writing it. If you're given a free book, great. Otherwise, support your author friend or relative by purchasing a copy.

3.    Give away copies of their ebooks

As I stated above, we authors sometimes rely on the little money we make off of our book sales. And digital copies of our books are real books no matter what anyone says. No, really. I promise. The same amount of dedication, sweat, tears and missed meals went into writing the book no matter what format it's available in. It's one thing to "lend" a copy to a friend every now and then, but to send out a mass email with to one hundred Facebook friends with the book attached is a no-no. Respect your writer friend and their profession and craft. Instead send that mass email with a link to buy a copy of their book instead. That's one way you can support your writer friend and she's thank you rather than despise you.

We writers share manuscripts and critique them for each other as sort of a do-me-a-favor- an-I'll-do- one-for-you type of deal. We reply on the other's skills to help improve the manuscripts. So when you present your never-written-anything-before-but-thought-I'll-give-it-a-try manuscript to a writer, who already has a to-do list a mile long and deadlines looming, don't be disappointed when you get a strange look from her. If you want feedback from someone in the business, ask her if she'd mind taking a look at it, but don't expect it to be that minute, hour or day. And if you know she's super busy with her own writing, and you know you won't be able to offer her any do-me-a-favor- an-I'll-do- one-for-you type of deal for her time, please don't ask her to thoroughly edit, rewrite or even write your story for you. 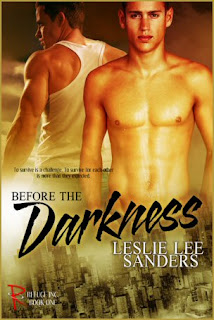 Before the Darkness (Refuge Inc., Book One) by Leslie Lee Sanders

After an asteroid strikes Earth, a series of violent earthquakes destroy secluded Phoenix and leave survivor Elliot struggling to stay focused in the bleak aftermath. And then he meets fellow survivor Adam. Together, the two search for reliable shelter and other survivors while distant murky clouds fast approach. Their hunt for shelter leads them down an alternate path when they find spray painted symbols directing them to a mysterious place: Refuge Inc.

As ominous clouds slowly shut off all light to their devastated world, they are forced to come to terms with their pasts and their growing attraction for each other.

Neither thought their pasts and personal crises would affect their ability to endure the horrors they're forced to live through. Neither thought they would be drawn so close to one another in the aftermath of an unimaginable catastrophe. By working together, can they continue to survive? Or will the mystery of Refuge Inc. cause diverse expectations and lead them to decisions that further threaten their lives?

"See that dark color on the horizon?" Adam pointed to the east, suddenly looking somber. "That's a wall of smoke, ash, dust and who knows what else, and it's coming our way."

"What? What do you mean?" A bit of panic began to stir in Elliot's stomach like a bowl of his mother's spicy and overly greasy chili. He'd thought the worst was over.

"Ever heard of impact winter?" Adam's green eyes pierced his and neither moved. "What's headed for us isn't good. We're gonna have to take shelter somewhere and fast before it blocks out all light and it gets so dark we won't be able to tell which way is up. Can't run from it either," he added, as if predicting Elliot's next question. "Been watching it for a couple hours now and it's moving pretty fast."

"What do you mean it's going to get dark?" He knew he looked like a wide-eyed idiot, but he didn't care much about his appearance at the moment.

"Let me put it this way. Once the sun sets we're not gonna see it rise for quite some time. That wall of soot headed our way is so thick it will block out the sun. It will take months, maybe years, for all the crap to fall down."

"Are you sure?" He dipped his eyebrows suspiciously. "How do you know all this?"

"When those assholes finally told us that an asteroid might hit, I went looking for info about anything to do with asteroids hitting Earth and that's what I found out. We need to find some shelter."

Elliot looked at the dark grey horizon. Indeed, the cloud of unnerving darkness grew bigger, wider, closer. His heart dropped, it sank in the pit of his stomach like a ton of concrete rubble. "We're not going to make it, huh?" He gulped, suddenly feeling defeated. Panic. "What's the point in finding shelter when we're not gonna live to see the sun again?"

Adam grabbed his hand, gave it a gentle squeeze and let it loose before Elliot realized it had happened. The friendly squeeze hadn't been part of his imagination. A look of sincerity and concern painted Adam's handsome face. "I was beginning to think the same thing and then I saw you. Like I said, two heads are better than one."


*To learn more about this book, visit the other blogs taking part in this tour listed here.