Review for Still Into You by Roni Loren 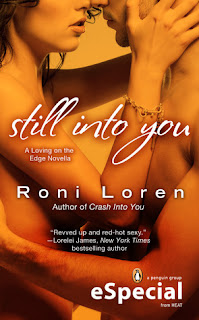 Seth and Leila used to have trouble keeping their hands off each other. Passion, desire, love—it was all there. Yet, eight years after their whirlwind marriage and kids, they’ve settled into a life where choosing Letterman over Leno is considered a wild night.

Seth knows things need to change. But when he hears his wife call into a relationship radio show and admit she’s been tempted to cheat, he realizes how far off course they’ve gotten. He comes up with a dramatic plan. Three days. No rings. He’ll take Leila to The Ranch, a resort where any sexual fantasy can be had, and give her the freedom to have whatever or whomever she wants.

However, Seth doesn’t intend to simply stand by and watch other men fulfill Leila’s dark desires. He has a lot more bad boy in him than his wife suspects and he knows there’s only one man who can give her what she needs. Now he has to show her why that man is him.

Roni Loren's Loving on the Edge series continues to entertain in this novella that features the sister of one of the main characters of Melt Into You and her husband who have hit a rough patch in their marriage and attempt to right what's gone wrong.  It's a highly emotional story with two people undergoing realistic and relatable issues, and includes some super steamy interludes to heighten the emotions.

Leila and Seth came from two different worlds, she the spoiled rich girl and he the hard-working blue collar boy, who got married young and have fallen into a routine of taking each other for granted and letting doubt overwhelm them.  An eye-opening moment makes each of them realize what they're about to lose and leads to an erotic weekend at the notorious Ranch where they'll give into long-held fantasies in an attempt to rekindle their marriage.  It's a rocky weekend though but also utterly sexy and enlightening.  The issues these two are going through befall many couples and Ms. Loren expresses their pain and doubts in a very realistic and easily relatable way.  As they ached, I ached with them and wanted them to fight for their marriage just as much as them.  They're both strong characters who lost their identities after becoming parents.  They're no longer man and woman but rather mom and dad totally devoted to their family life.  Only by focusing on their individual selves can they recall what made them first fall in love with each other.

There's a constant feeling of sexual tension permeating the entire story along with some very steamy encounters at The Ranch that kept my heart racing.  The scenes mostly involve Leila and Seth but there is one encounter that's made even more erotic by the addition of Ian, whose story will be released next summer.  The connection between Leila and Seth is clear no matter what problems they're having and I found their journey to rediscovery to be emotionally satisfying, even though I wish it had been a bit longer, and yet another reason why I adore Roni Loren's writing style.  Still Into You can easily be read on its own, but with two other books in the series just as amazing, why wouldn't you want to read them all?