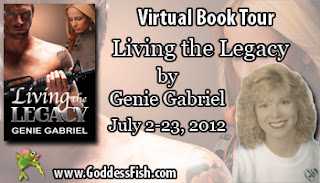 Those who enjoy a bit of suspense with their romance need look no further than Living the Legacy by Genie Gabriel.  There's edge of your seat action amidst love put in danger.  Genie's here today to talk about her latest release as well as providing a giveaway.  So keep reading to get a taste of this book as well as the chance to win TWO gift cards.


How does this book connect to the others in this series, and what sets it apart?

I love the chance to talk about my LEGACY series as a whole!

The series is tied together by a family of eight adopted siblings and a decades-old secret that led to the death of their policeman father.

In a close-knit family such as the O'Sheas, some key events affect all members of the family, such as marriages and pregnancies, grieving the loss of their adoptive father and their hometown of Halo being destroyed by dynamite explosions.

To make the books fresh and distinctive, each one focuses on a different sibling and their adoptive mother finding romance and pieces of their pasts. The unique personalities of the main characters and their experiences before being adopted provide many surprising discoveries and interesting characters.

My July release, LIVING THE LEGACY, focuses on the oldest O'Shea son and the woman he marries. Their romance is just beginning when a vengeful ex-cop blows up their hometown. Collin is stunned he could have lost the woman who has so quickly curled into his heart, and asks her to marry him. Caught up in a whirlwind courtship, their different expectations don't become obvious until after their marriage. As a young child and in his career as a police sniper, Collin has experienced the harsher side of life. But his wife, Beth, has been a treasured only child of older parents and was very sheltered. Her innocence brings joy to his jaded soul, but mysterious people from Collin's past put her in grave danger.

Action scenes and explosive events, as well as the discovery of birth families, are interwoven in the LEGACY series to tell stories that test the loyalties of the O'Shea family and shake the pillars of the small fictional town of Halo, Oregon.

So pull up a chair and join us for dinner at the O'Shea's. But don't get too comfortable--you may have to run for your life!

Many thanks to "The Scarf Princess" for having me as a guest today. I look forward to chatting with all of you! 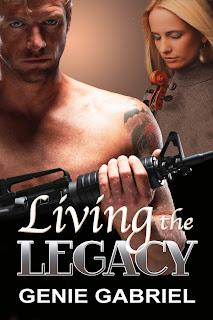 Living the Legacy by Genie Gabriel

A reluctant sniper cherishes the innocence of a small-town woman, but their love may destroy them both.

Collin watched the glow in Beth's eyes as she talked to members of the orchestra. The delicate lavender color of her formal gown and the diamond clips in the upswept curls of her hair enhanced her physical beauty. However, it was the love of music sparkling in her conversation that really captured Collin's attention.

The scent of her flowery shampoo filled Collin's senses and sizzled through his body. She stood close enough he would only have to take a step forward to fold her in his arms. To protect her from the angry and distraught and plainly malevolent people he met every day on his job...

The vibration of the cell phone in his pocket clearly reminded Collin of that job. Caller ID showed this interruption was a serious one.

"Do you mind driving my truck back to Halo after I stop at the station? I won't have time to make the trip"

Doubtful hesitation crinkled across Beth's face. "If you don't mind."

"I mind leaving you without a proper escort home."

Collin drove quickly to the station and pulled into a parking spot. Then he cupped Beth's face between his hands and kissed her gently. As the seconds ticked away, his cell phone vibrated again.

He had to leave. He allowed one more moment of regret, then said goodnight, and strode inside to confront whatever emergency was once again claiming his life.

"About time you showed up, O'Shea." His team leader frowned. "We've got a town blowing up. We're sending all the manpower we can spare."

"What town?" Collin shrugged into his camouflage jacket.

Collin froze as a crystal clear image of Beth lodged in his mind. She was driving straight into a disaster. 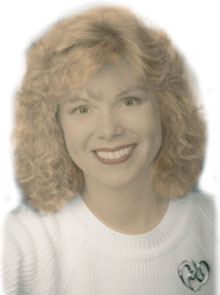 For years I've been fascinated by the puzzle of why some people collapse under life's traumas and others emerge triumphantly stronger. These triumphs of the human spirit over the ugliest of adversities became the basis for my stories. Yet my dramatic stories have always contained touches of humor, and sometimes I have great fun writing romantic comedy novellas. However, in all my stories, my passion for writing romance is an outlet for the powerful messages that people can overcome great difficulties, and true love can turn life’s heartaches into happily ever after.

Prize is a $25 Amazon GC to one randomly drawn commenter during the tour and a $10 Powell's Bookstore GC to one commenter at every stop.

-Giveaway is OPEN TO EVERYONE!
-To be entered, MUST leave a comment, along with your email addy.
-Winners will be chosen randomly from all comments made throughout the tour, so the more tour stops you make a comment on the greater your chances of winning.  A list of all participating blogs can be found here.
-Giveaway ends at 11:59 PM CST on 7/23.
at July 02, 2012