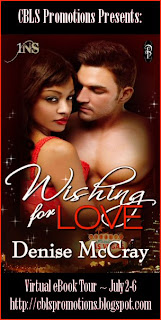 Decadent Publishing's 1Night Stand series has another sexy and entertaining addition to the series with this paranormal story featuring two lovers with secrets that could destroy a relationship just starting to bloom.  Denise has created a satisfying short story that makes for an afternoon of fun so keep on reading to learn more about Wishing for Love as well as entering a giveaway for two readers to win a digital copy of this book. 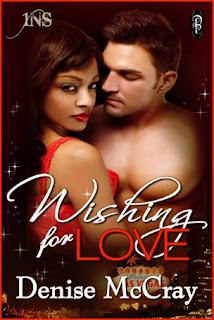 Wishing for Love by Denise McCray

As a witch, Luvenia Spells has the worst luck in the world. With a snap of her fingers, she can grant anyone their deepest desires, except herself. All she wants is a man to love and for him to love her in return.

Marcus Rush is a man used to getting what he wants. With a stellar career and women tripping over themselves to get next to him, what more can a fellow ask? For a start, a real woman not looking for material things is at the top of his wish list.

Veni quickly opened her eyes and tried to look wide-awake. A bellman stood before her with a bemused look on his face.

Awkwardly righting herself in the chair, Veni responded with a noise somewhere between a grunt and a snort. Real classy, Veni. The poor man struggled to maintain a professional expression, but could not hold it together and allowed a wide grin to split his face. “Your room is now ready,” he said holding out her key cards.

He stood in line at the registration desk with an I-am-the-man air about him. At a minimum, he was at least six-four tall and had a runner’s body with a cute little behind obviously created for a woman to touch. That’s how she liked her men, long and lean, and mama surely liked what she saw. Suddenly his head turned in her direction and a smile, which she could only describe as predatory, appeared on his face. Busted!

*To learn more about this book, visit the other blogs participating in this book tour listed here.