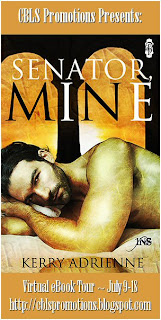 Those who are fans of stories featuring gladiators will find much to like in Kerry's first story in her All Mine series, Senator, Mine.  This story is also part of Decadent Publishing's 1Night Stand series so you know you're in for a sexy romp.  Kerry's here today talking about an intriguing character in this new release as well as giving away some copies of this book, so let's get right to it.....


So what exactly is a Sibyl? Darius visits the Sibyl in Tibur (modern Tivoli, Italy) in Senator, Mine. A sibyl (the word originating in Greece) means prophetess. Yes, they were always women. Through ancient history, there were a varied number of sibyls—Plato talks of one, and Aristotle mentions several. Later, even, we hear about as many as ten at a time.

Probably the most famous sibyl is the oracle at Delphi. This sibyl worked for Apollo—and she spoke his words while seated over some kind of vent that spewed gasses. Apparently, the gas made her quite out of her head and she “raved”. Priests would then translate her ravings into prophesy. People visited her to get answers to all kinds of problems.

The sibyl in Senator, Mine is also pretty famous. She prophesied a few things that stuck with history—including prophesying the last days of mankind and an “anti-Christ” type of figure (as later interpreted by the Church):  “He will delude many by magic art so that fire will seem to come down from heaven. The years will be shortened like months, the months like weeks, the weeks like days, the days like hours, and an hour like a moment.” Pretty interesting stuff!!

In Senator, Mine, I didn’t have the sibyl rave so much (frankly, that is a little scary, and I wasn’t going for scary), but tried to portray her as wise and a little kooky. But powerful.

I’ve always been fascinated by the sibyls, and I hope this little tidbit of info will make you interested in finding out more, too. I think if I lived back in Ancient Greece or Rome, I’d like to be a Sibyl. (yeah, not a Vestal Virgin—what’s the fun there?) 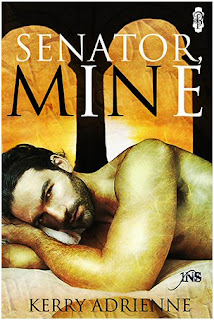 SENATOR, MINE (All Mine, Book 1) by Kerry Adrienne

Eleanor’s dream of a romantic tour of Italy shatters when her long-time boyfriend breaks up with her in Pompeii. Determined to enjoy the once in a lifetime vacation, she enlists the 1NS service. She continues her trip, stopping to buy a small golden signet in a mysterious antiquities shop in Rome.

Darius, a hard-working Senator in Ancient Rome, is puzzled by the Sibyl’s words: You will not find love in your lifetime. Hoping to find a measure of happiness, he agrees to the Sibyl’s quest. In the olive grove, he spots Eleanor, a barbarian wearing his stolen senator’s ring.

A night spent together may be just what they both need to break down the columns of time that stand between them.

“What is it?” She moved closer to examine the object he held.

“A senator’s ring from the time of Augustus.” He waved the item with a flourish. “A rare and beautiful find, for a deserving young woman.”

The golden circle sparkled in the half-light like the wedding band that shone in her dreams. She tried to control her sharp intake of breath.

“A rather personal memento, wouldn’t you say?”

“Which senator?” Gorgeous. What a find. Was it legal to take it out of the country? Surely it held historical significance.

“Yes, it can be exported,” the shopkeeper said. “We don’t know who owned the signet, as many records of the Senate at that time were lost, but it has been cleared by the Antiquities Commission.”

She hadn’t mentioned exporting it aloud. Had he read her mind? No, that wasn’t possible. She squirmed. Nothing about the shop or its contents felt normal. One thing was certain. The ring was amazing. And perfect.

“What does the engraving say?” she asked.

She drew in a quick breath, as a gasp of warm air breezed across her neck, making the hairs stand. She shuddered. I’ve been watching too many old movies.

“As common as the name was at the time, no senators named Darius are on any rolls.” The shopkeeper pushed it closer to her face. “And Madame Eve recommends it. What do you say?”

“How much?” Eleanor whispered.

“Ah.” The shopkeeper grinned. “What price would you pay for a little ring that will change your life forever?” 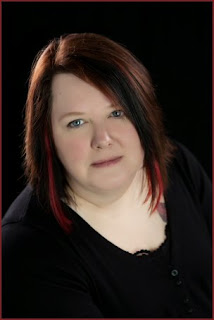 Kerry holds a BA in English: Writing and Editing with a minor in Classical Studies from NC State University. She has extensive freelance editing experience, and teaches various fiction writing classes at a local college. She is an Associate Editor with Entangled Publishing. In addition to editing, Kerry writes science fiction, romantic fantasy, and paranormal romance.

*To learn more tidbits about this book, visit the other blogs hosting this tour listed HERE.