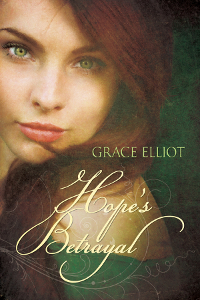 Known for his ruthless efficiency, Captain George Huntley is sent to stamp out smuggling on the south coast of England. On a night raid, the Captain captures a smuggler, but finds his troubles are just beginning when the lad turns out to be a lass, Hope Tyler.

With Hope as bait, the Captain sets a trap to catch the rest of the gang. But in a battle of wills, with his reputation at stake, George Huntley starts to respect feisty, independent Hope. Challenged by her sea-green eyes and stubborn loyalty Huntley now faces a new threat - his growing attraction to a sworn enemy. But a love where either Hope betrays her own kind, or Captain Huntley is court-marshaled, is not an easy destiny to follow.

Hope's Betrayal is a straightforward historical read with nothing too unexpected happening.  This is not a bad thing considering how comforting that sense of familiarity is while reading this book.  The characters acted in a way that made sense, there were no big misunderstandings, and the relationship between the main characters evolved slowly over time as to add strength to their relationship.

Hope Tyler has aristocratic blood in her but her family has fallen into smuggling to make a living.  She's a smart and honorable girl and doesn't like having to commit crimes, but does it out of love for her family.  The night she's captured by George Huntley shows her the path to a whole new life if she's just willing to accept the opportunity presented to her.  Hope is strong-willed and loyal and is easily accepted by those trying to help her.  Seeing her find moments of happiness was heartwarming to see.

George Huntley sees life and the law in black and white until the night he locks eyes with Hope.  At first he wants her to pay for her crimes, but as he hears her life story he knows he'll move heaven and earth to keep her safe.  As a man who had closed himself off to love, Hope thaws his cold heart and brings joy and a sense of hopefulness to his life when he needs it most after being permanently maimed and having the course of his life totally upended.  It's because of her that he sees the possibilities as opposed to everything he's lost.

Hope and George are a wonderful couple.  They acknowledge the difficulties that their class differences are to their budding relationship but this is where the power of love overcomes all.  Their relationship evolves slowly and sensually over a year and a half and it isn't until the very end that things enter a more sexual level.  George is that much of a gentleman and really won me over as the story progressed.  He was quite arrogant at first but really showed and expressed his feelings as he realized how much he needed Hope.

This is the second book in the Huntley Trilogy and can stand on its own.  The main couple from the previous book make an appearance but it's more of a check-in to be updated on how they're doing.  The glimpses we see on the remaining single brother have me excited for his story to be told as he's very sexy and sarcastic, a great combination.  Hope's Betrayal gives fans of historical romance everything they want, a likable couple who find true love through an exciting and believable journey.

*I received this book from the author in exchange for my honest opinion.
at July 25, 2012