I'm excited today to bring you another of Riptide Publishing's wonderful authors.  Tal Valante is a debut author and is here today talking about her first ever release, All My Crimes, a m/m fantasy-themed short story that gives an emotional punch.  Tal is also offering up an awesome prize to all of you visiting today and throughout the whole tour.  So let's get right to the fun......

Hello and thanks for joining me here! Today I have for you a sneak-peak at the prequel of All My Crimes, telling how the two major characters came to be lovers. Before we dive in though, here's a little contest for you: email me your answer to the question below, and you'll be entered for a chance to win a $50 Amazon.com gift card!

Question: On what street are they giving away food in Gidden's city? Email your answer to allmycrimes@gmail.com for your chance to win. The more questions you answer, the greater your chances, so be sure to visit all stops of this tour. Good luck!

And now, without further ado, a sneak-peak at Time of Innocence:

King Gidden Loristan squirmed in his high-backed chair at the head of the council table, thoroughly distracted by the slender hand that was exploring his left inner thigh.

"Your Majesty," Lord Ruddery was saying, "I must protest the implications regarding my son."

He sent a pleading look across the table at Lord Teregryn Eve, who cleared his throat to draw everyone's attention. Dear Teregryn.

"The King is not suggesting your son is an inconsiderate boar," Lord Eve said soothingly.

"Thank you," Lord Ruddery said and took his seat again.

But Teregryn wasn't finished. "His Majesty is merely pointing out that several reports on the matter have reached him, and requests that you see to it not happening again."

"How dare your son?"

"Unlike you, he's a nobleman—"

"I would hardly call him noble—"

Gidden lost track of the tirade when the hand at his thigh reached higher and squeezed his cock. He didn't quite squeak—surely kings did not make such indignant sounds—but whatever voice had escaped him snapped everyone's attention back to him.

"My lords," he said, reaching under the table and arresting the devious hand. "I suggest that we recover the morning—" he cleared his throat and pried the stubborn fingers away from his cock "—that we reconvene tomorrow to finish this discussion. At your leisure."

If the nobles knew what transpired underneath the council table, they gave no hint of it. They rose from the table, some with relief, Lord Ruddery with anger, most of them with carefully blank masks, and bowed themselves out of the room one by one.

Only then did Gidden turn on his wife, Her Majesty Queen Isador Loristan. "You're incorrigible."

She grinned, flashing her dimples. "He was tedious. And his son is an inconsiderate boar."

Gidden spread his arms helplessly. "In the council chambers?"

Yes, he'd missed her too. The war with the elves, always the war, stole him from her side all too often.

"Well, now with the lull in battles, you have me," he said.

Again her dimples. "Then you cannot blame me for taking advantage, Your Majesty."

A muffled chuckle sounded from the doors.

"And you!" Gidden turned to Teregryn, who'd lingered at the entrance.

But when she leaned in and whispered in his ear, "Bed," he couldn't help but shiver with anticipation.

Teregryn bowed them out of the room with a wry smile.

Hope you enjoyed! Don't forget to participate in the contest for your chance to win an Amazon.com gift card. 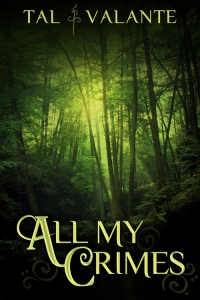 All My Crimes by Tal Valante

The war with the elves is over. But for Teregryn Eve, the human king’s former right-hand man, another nightmare is about to begin.

It’s taken Teregryn two years to recover his health and magic in the aftermath of the war. He’d rather retire from the world of men, but an assassination threat and a malevolent ghost force him on a quest to save the king who no longer wants him. The elves are dead to the last, so who’s the mysterious assassin? And why has his king—who was once so much more to him—forsaken him?

The answers may lie in Teregryn’s mind, but those memories are locked beyond his reach. As a web of lies and love unfolds around him, Teregryn must fight the past and present in a desperate bid for the future. Can he save everything he loves, or will the sum of his crimes drag him under first?

Read an excerpt or purchase All My Crimes here.

Tal's passion in life is building worlds, whether digital ones using programming languages, or literary ones using plain ol' English. When she's not buried neck-deep in code, you can find her editing manuscripts, designing fantasy worlds, or torturing characters in her own original works.