Review for The Naked Truth by Lilly Cain 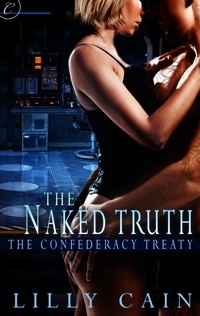 Captain Susan Branscombe was the victim of brutal torture at the hands of terrorists. Though rescued, she's now facing an equally brutal accusation: treason.

The only way she can prove her innocence is to allow Asler Kiis, a Confederacy Examiner, to delve into the depths of her mind. Asler is Inarri, the alien race that made contact with Earth just months before. His duty is to find the truth, but when he explores Susan's mind he can't resist drawing her into a more intimate experience.

Is the passion they share enough to let Susan push aside her fear and trust Asler, not only with her mind and body but with her ever-opening heart?


As the second book in The Confederacy Treaty series, the action picks up seamlessly from the previous installment with humans and the Inarri still trying to forge a contract before a dangerous alien force comes to wipe out the Earth.  Political intrigue abounds as there's a traitor trying to derail the treaty talks with their identity being well hidden.

We were introduced to Captain Susan Branscombe in the previous book and saw a woman with strength and an abrasive and untrusting attitude.  In The Naked Truth, Susan's been put through some of the most awful things imaginable after being taken by terrorists.  The glimpses we see of her being tortured are intense and I felt that there were even more heinous acts done to her merely alluded to by the author.  It's made her doubt herself and her actions and it's left her career in jeopardy.

To prove her guilt or innocence Asler Kiis is assigned to sort through her memories which puts them in extremely close contact.  The Inarri are a very sexual society and to discover another's hidden thoughts and feelings requires a lot of touching and skin to skin interactions.  They also have no shame when it comes to nudity in public.  When you take all that into account, it's no wonder Susan and Asler end up steaming up the pages as they unravel the truth about what happened to her.

Their sexual interactions are intense and nicely spaced throughout the story.  Not only do they connect on a physical level but also a mental level which adds to the intimacy of their time together.  He brings a calming influence to her pent up feelings and would do anything to see her safe, even throwing away his own career.

The action sequences are exciting and pulse-pounding and totally drew me in from page one.  The technological advances are intriguing and add a sense of wondrousness to what the Inarri promise the inhabitants of planet Earth.  Many of the secondary characters are also curiously intriguing and I can see many possibilities for more stories in the future and sincerely hope Ms. Cain has plans to keep the series going for a long time to come.

The storyline of this story makes for a very adventurous roller coaster ride that keeps you on the edge of your seat.  With its relatable and likable characters you can't help but be invested in their outcome.  Ms. Cain has created a story that practically leaps off the page and is one I highly recommend.


*I received this book from the author in exchange for my honest opinion.
at July 05, 2012