One of my favorite authors, Aleksandr Voinov (an author I read when I want an intense and enthralling read), is here today with his new release Incursion.  Incursion is an exciting read that combines many of my favorite elements, the biggest being that it's based in the sci-fi genre.  This, and the intriguing characters, kept me on the edge of my seat and ready to return to this world anytime Aleks' chooses to.  So sit back and get a sampling of this book, as well as info about an amazing giveaway taking place throughout the entire tour with a listing of stops here.


Thanks for joining me on the Incursion virtual book tour! Feeling lucky? I’m giving away three prizes to commenters on any of the blog tour stops. Comment on this post (feel free to ask questions!) and you might win! The first winner will receive a $25 Amazon gift certificate and a swag bag with assorted magnets, wrist-bands and other goodies. Two more lucky winners will receive swag bags as well. I ship internationally and will draw the winners from all commenters after the tour is over. Deadline for entry is 7/15/12. Please include your email address in your comment so that I can contact you.  Enjoy! 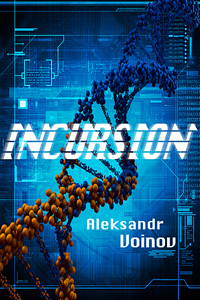 Fighting with your back to the wall is all well and good—as long as you’ve chosen the right wall.

When the local authorities ask Kyle Juenger to hunt a shape-shifting Glyrinny spy, he can’t refuse. After all, he can use the reward to replace his paralyzed legs with cyberware, and maybe even to return to his home planet. Besides, he hates the morphs—those invasive, brain-eating monstrosities whose weapons cost him his legs.

Kyle’s best lead is the Scorpion, a mercenary ship armed to the teeth. Grimm, the Scorpion’s pilot and captain, fascinates Kyle. He’s everything Kyle lost with his legs, and he’s from the same home world. He’s also of the warrior caste—half priest, half savior. But Grimm’s been twisted by life as a merc, and Kyle’s stuck undercover as a criminal on the run.

That doesn’t stop Grimm from coming on to Kyle, or from insisting he’s more than the sum of his past and his useless legs. But Kyle has other concerns—like tracking a dangerous morph who could be wearing anyone’s face. And as if things weren’t complicated enough, Kyle can’t tell if Grimm is part of the solution . . . or part of the problem.


I have one more exclusive excerpt for you today! On the Riptide site, you’ll find an excerpt with the beginning of Incursion: http://www.riptidepublishing.com/titles/incursion

After that, Kyle encounters the band of space mercenaries (and the mysterious Grimm), and Grimm invites him to co-pilot the ship. In this scene, they are setting up the pilot seat and then Grimm makes his move:


“Let’s set this up,” Grimm murmured, sliding his hand in between the cushioning and Kyle’s shoulder. The chair made a disapproving squeak, begrudgingly adjusting to the intrusion of living tissue between the pilot and itself. Grimm ran his fingers along Kyle’s arm, down to his hip, and across the curve of his ass. “Yeah, nicely responsive.”

Kyle glanced at him. “You wish.”

Grimm paused, then grinned. “I meant the chair.”

“Knock it off. I’m really no fun.” His standard letdown these days. Not that he had to use it often. With the prostheses, most people treated him like he’d suddenly morphed into a different species—something way too complicated to have sex with. And he’d grown to agree. He was too complicated to attempt a connection with the other species: the abled. Especially when the connection was something as fragile as sex.

“I’ll decide whether you’re fun or not.” Grimm’s hand hovered near his hip rather than making its way down his legs. “Maybe I think you are.”

Kyle swallowed. Now, Grimm was insistent. He was Tamenean, and, fuck, he was also a warrior. Shining knight on a white steed. A born and bred hero, selfless and noble. And even though Grimm had clearly made a mockery of the tattoo on his face, Kyle still felt that old reflex to take his hurt to a warrior.

Take your darkness to the warrior, for they can slay it.

“Some kind of warrior you are,” Kyle muttered.

“You didn’t ask.” And it’s a no, he was about to add, but Grimm shut him up with a deep, curiously intense kiss. It wasn’t even probing so much as familiar, like they’d been lovers before, even for years, and the old spark had never withered. He tasted of electricity and copper wires and all too human. Kyle groaned with pleasure when Grimm ran his fingers through his hair. He felt more alive than he had in weeks—his scalp tingling under a touch too sensual to have come from a stranger.

“I’ve wanted to do that for a while,” Grimm murmured.

“I’m sure Jay and Petros wouldn’t mind a third guy.”

Focus on the work. Kyle pushed the thoughts away and then the man. “You got from me what you wanted.” Pretend this is still about the stupid codes.

“Not by a long shot,” Grimm said, and it sounded like a promise.

Kyle shifted his weight as best he could to test the chair himself, but everything was in order. Just needed to do something so he didn’t have to look at Grimm or acknowledge the touch. “Give me access to the system.”

Grimm laughed, stood back and adjusted himself in his jumpsuit. “You can have all the access you want.”

Bastard. Kyle’s gaze stuck for a second to what Grimm held in his hand, and a hot-cold sensation flashed over him, a memory of arching over the body of another man, sweaty skin sliding together. He ground his teeth in frustration. Ever since the injury, nobody had been so insistent on getting into his pants; he’d overheard a nurse saying he was damn cute and it was a crying shame, but nobody had managed to get him into bed. Early on, he’d resolved that people who wanted him because of the prostheses—and there had been two or three—were fucking freaks and he wanted nothing to do with them. But he hadn’t counted on meeting a warrior so far from home.

“The system,” he reminded Grimm.

“Fine.” Grimm threw his hands up and went back to his chair. He tapped buttons and pulled levers, and Kyle’s screen came alive like his body couldn’t anymore. But he felt the current of excitement all the same. He logged on, shook hands with the system, set up his ID, and the systems recognized the other Kyle, the petty criminal. Connected again.

In his spare time, he goes weightlifting, explores historical sites, and meets other writers. He singlehandedly sustains three London bookstores with his ever-changing research projects and interests. His current interests include World War II, espionage, medieval tournaments, and prisoners of war. He loves traveling, action movies, and spy novels.