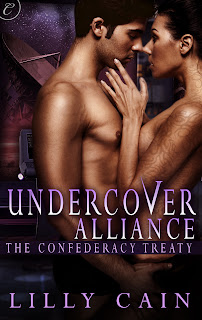 Sarina is scarred. Her L'inar, the curving nerve lines that enable Inarrii to experience their full sexuality, were severed in battle and she can no longer reach completion. Until she accepts a job as bodyguard to the human ambassador John Bennings, and is astonished to discover that they share a mental bond—a mirrored pathway of thoughts that will allow Sarina to climax.

To prove that she is whole and rejoin her Inarrii clan, Sarina needs John to bring her to climax in public in accordance with tradition. With a roomful of Inarrii and humans watching, will John be willing to perform as Sarina needs—and will their public display make John vulnerable to another attack?

The political intrigue, suspenseful action sequences, and steamy sexual interludes continue in this third installment of The Confederacy Treaty, Undercover Alliance.  The treaty between the Inarri and humans is still in danger with traitorous individuals coming out of the woodwork when you least expect it to keep you on the edge of your seat.

Through the actions of Captain Susan Branscombe in the previous book, Sarina is left permanently scarred in a way that makes sexual fulfillment difficult and makes her a pariah to her clan.  The glimpse we saw of her in the previous book was one of a saddened woman unsure of her future and place in society.  She's still uncertain and the therapy she's going through isn't helping things.  I liked seeing this vulnerable side to a woman who's very commanding when doing her job.  She's also very outspoken and not afraid to admit her sexual needs, which made for some very hot and heavy sexual encounters.

John Bennings is a man full of secrets who's more capable than he appears.  Those secrets have put his life in danger and consequently Sarina's life as well.  This danger brings them together almost immediately in some refreshingly honest and sexy sexual interludes.  The Inarri's blatant sexuality makes for one particularly steamy public scene that fits in naturally with what we know of their culture.  John's an immensely likable character with a bit of brashness and cockiness that adds to his sex appeal.  He treats Sarina as an equal and doesn't see her as damaged, unlike her own people.  This made me like him even more.

The secondary characters continue to excite me, particularly the Examiner helping Sarina.  Many intriguing tidbits about him were dispersed throughout the book that have me dying to know his whole story.  The world-building continues to be top notch with its amazing technological advances that added to the suspenseful roller coaster storyline.  Each book can be read on its own but it's a much richer experience reading them sequentially.  Fans of sci-fi will definitely find much to like here as well as those wanting some steamy romance.  Undercover Alliance was satisfying from start to finish and I hope Ms. Cain revisits this world soon.

*I received this book from the author in exchange for my honest opinion.
at July 05, 2012