Review for Try Me by Olivia Cunning 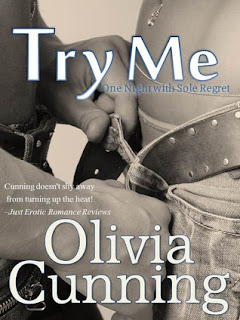 For the five sexy rock gods of Sole Regret, finding love is easy, keeping it is hard.

Melanie has no desire to meet the members of the rock band, Sole Regret, but her groupie of a best friend gets them both backstage and then rushes off with the band’s lead singer. Left alone at an after party with a bunch of scary tattooed and pierced metal-heads, sheltered Melanie is relieved when the only normal-looking guy in the room insists on keeping her company.

By the time Melanie discovers that Gabe is the band’s drummer and not as normal as she assumed, she has already made a complete fool of herself. She can’t help but be interested in him, not as a rock star, but as the sexiest man she’s ever encountered. Strangely attracted to his hidden tattoos and body piercing, she wonders what it would be like to spend a night with a bad boy.

Gabe is more than willing to show sweet Melanie there’s more to him than meets the eye. All she has to do is try him. Will they only share a single night of passion? Or will their hearts entangle as quickly as their bodies?

No one presents rock stars as perfectly as Olivia Cunning does.  She already writes one of my favorite series featuring one amazingly hot rock band and she's now added this one to her repertoire.  Try Me is the first in a new series and features the unlikeliest of couples.  What starts out with a slow burn soon becomes super scorching in this HFN novella.

Melanie's always been the responsible one, helping her wild child friend at any given moment.  Her friend's latest obsession is the hard rock band Sole Regret and Melanie ends up as part of the plan to meet the band.  Melanie's soon left on her own and meets the one seemingly normal-looking guy backstage, finding herself unexpectedly attracted to him.  For a girl who's scared of men with tats and piercings, once Gabe Banner starts undressing, she quickly changes her opinions.  Melanie feels a bit naive and unworldly at first, she almost acts like a virgin.  Once she's presented with the temptations that Gabe has to offer, her inhibitions are quickly shed which leads to quite a few erotic scenes with some unique methods being employed courtesy of Gabe's interesting pasttime.

Gabe is one sexy beast, not at all the arrogant rock star that another of his bandmates is.  He has hidden layers that no woman until Melanie has bothered to look for.  He's somewhat embarrassed by his scholarly beginnings but Melanie is enthralled by every aspect of him and soon comes to relish what a genius can do in the bedroom.  They make a wonderful couple, bringing out a different side to each other.  They never realized that they wanted something permanent until it's time for them to part, which leads to a promising future once they decide to take a chance.

There are lots of steamy encounters entwined throughout the story that give a believable feel to the rock star lifestyle.  Sexual interludes that are smokin' hot on the erotic scale made my heart frequently race.  Not only is Gabe drool-worthy but there's four more unexpectedly attractive band members oozing sex appeal, along with an overinflated ego or two, waiting for their stories to be told.  The glimpses we get of each show men with emotional issues just waiting for someone to help heal.  I'm definitely counting down the days to rejoin this band on tour when the next installment in this series is released and recommend this to fans of Ms. Cunning's other rock stars series.